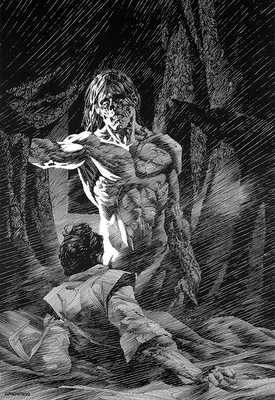 Plot:
Arctic adventurer Captain Robert Walton happens across a desperate man who he rescues and takes on board his ship. The man, a one Victor Frankenstein, befriends the explorer who he feels an almost immediate kinship with. Hearing of Walton’s ambitions to reach the North Pole he feels moved to tell the story of how he came to be in such a dire situation hoping it will serve as a cautionary tale for the driven captain.
Victor was inspired from a young age by the writings of ancient alchemists to seek out the secrets of nature. He eventually settles into serious medical science, but the wonderment of his early youth won’t leave him and he uses his new practical skills to achieve an incredible singular goal: to create life. This will lead to tragedy. Having been brought up with a loving family and an adopted sister who is destined to be his wife, Victor will experience a life of pain for his selfish actions. Appalled by the “monster” he has created Victor will shun his work, only to have it come back and haunt him with murder and persecution…

Review:
“Frankenstein” is a novel that has many fascinating themes. It is the first of the three most influential 19th century horror novels, the other two being “The Strange Case of Doctor Jekyll and Mr Hyde” and “Dracula”, and the most diverse. Some of the most popular areas of discussion include its status as a science fiction novel. Mary Shelly remarked that she was inspired by the discussions between her future husband, the great romantic poet Percy Shelly and his close friend, the equally notorious poet, Lord Byron, as they prophesied the scientific developments of the future, including the creation of life. This brings us to the moral question that many see in “Frankenstein”, and is even stated by Elsa Lancaster when she played Mary Shelly in James Whale’s “The Bride of Frankenstein” in 1935, should man play God? Given her influential husband’s rather aggressive stance on religion (Shelly was expelled from Oxford University for publishing a pamphlet on atheism) and Mary’s own rather radical upbringing (she was the daughter of two famous progressive thinkers, William Godwin and Mary Wollstonecraft) it’s a surprisingly conservative Christian view. Technically speaking, “Frankenstein” is the only one of the previously mentioned horror novels that isn’t Victorian, but in this sense it fits in with the moralistic fashion of the latter part of the 19th century.
However, we can also contend that “Frankenstein” turns some Christian thinking on its head. Mary Shelley uses the puritan poet, John Milton’s “Paradise Lost” as a strong reference point throughout her novel. The monster sees himself in God’s cast out angel, Satan. Despite being the main antagonist of ’s epic Christian poem and indeed Christianity as a whole, Mary Shelley found sympathy in the character. He was God’s favourite and a creation of God who was then shunned for his rebellion. The monster feels unfairly shunned by his creator and incites his own rebellion. Like Satan, he is both melancholic and terribly vengeful.
Mary Shelley’s ideas about what makes the monster an instrument of evil has never really left the public consciousness. Years after her work was published psychologists, psychiatrists and criminologists have argued how much nature and nurture has to play in the development of a cognitive living being. Frankenstein immediately believes he has created a monstrosity whereas the monster blames the unprovoked treatment he receives from everyone for the violent and malicious acts he commits. Interestingly James Whale’s production of “Frankenstein” in 1931 felt the need to have the monster fitted with a “criminal brain”. And even more interestingly Karloff’s character still evokes sympathy. If the monster does anything in the novel or in any of its half-decent adaptations, it is to convey a sense of direct and indirect responsibility. In a similar sense so do most serious investigators into criminal psychology.
So what of the merits of the actual novel? The story is rightly held up as a great classic of its genre and beyond. It is pioneering in many ways and undeniably influential. In fact, only “Dracula” can serious compete in terms of brand recognition in the horror world. However, despite Mary Shelley’s great literary ability and amazing circle of literary influence, it is worth remembering her work is the product of an 18 year old girl. Her immaturity comes out in the character development. Both Frankenstein and his monster easily have more depth than any other character, but I am not quite sure whether they stray much further than the archetypes they fulfil. “Frankenstein” is a meshing of mythological themes and archetypes. It is not so much a case of Faust is tempted and fooled by Satan as Faust creates Satan. There is nothing wrong with this idea, but Mary Shelley cares little for her reader’s credulity. Victor’s sudden swing in attitude from the man who creates the monster to the man who is repulsed by his creation is a little hard to believe. He only becomes a driven man once again in his quest to destroy the monster once everything else is taken away from him. Between the creation and his final mission in life, Victor exhibits nothing of his obsessive personality. The monster’s story, as told by himself, stretches belief even further. Not only does he self-educate himself in classic literature whilst hiding out in a barn for a relatively short period of time, but somehow the entire family who own the barn are completely unaware of an eight foot monster living virtually on top of them!
Nevertheless, the book is a firm favourite of mine and I guess that mainly comes from the youthful energy Mary Shelley invests in it. That circle of influence I mentioned early on comes through in a beautifully impassioned way. The supporting cast may be two dimensional and transparent devices, but it is the way that Victor and the monster express their feelings for them that makes them important to us. Earlier I compared the novel to the other two great 19th century horror novels. “Frankenstein” is a weightier novel than “Dracula”, but not as well written as “The Strange Case of Doctor Jekyll and Mr Hyde”. There is something of an overload of Mary Shelley’s influences that are not always relevant to the story, including the opinions of her mother. However, if I had to choose between them I would choose “Frankenstein” because despite its shortcomings the book offers far more than the humble ghost story Mary Shelley intended it to be.
If you enjoyed this article please vote for it on Helium, Ciao and Dooyoo.