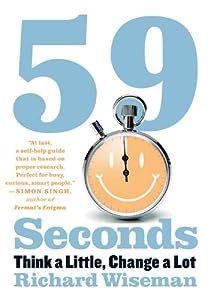 Cover via AmazonSceptics are often considered to be life's party poopers. Damn them and their rationality, sense of logic and reason! Not satisfied with debunking everything from reptoid conspiracy theories to hippy herbal cures in recent times the critical eye has been cast over the self-help movement. According to Professor Richard Wiseman much of the advice being touted by the gurus of positive motivation is based on little scientific evidence. In fact, many anecdotal stories told by these gurus relating to certain experiments used to justify their methods are either only partially reported or didn't happen at all. So, you might think, if this isn't raining on the proverbial happy parade than what is. Well, according to Wiseman much of these self-help
methods are not only ineffective they can be potentially harmful. However, the good news is that there have been a number of peer-reviewed and thoroughly researched studies that have found great positive things we can do to help shape our lives for the better. The trouble with empirical scepticism is that it is science-based, which means is that once it gets past calling the charlatans and the deluded on their unfounded and supported claims it seems to presents a rather dull picture for the layman. Science is a complex system that accepts no absolutes and rarely provides the level of immediate gratification that a belief system does - whether that belief system is based on primitive healing methods or in the existence of the supernatural. This is the problem that "59 Seconds" proposes to tackle head on. The book begins with Wiseman's gentle deflating of a friend's enthusiasm over a new self-help book. Having shown the methods being presented by the book were not effective and even counterproductive, Wiseman had a challenge lain at his door. Provide the best science-based solutions to improving happiness, being liked, being a better parent, attracting the opposite sex, being successful and all the other things that the self-help world has made millions off. With most of his professional life dedicated to understanding and manipulating human behaviour, this was not a tall order. However, there was one special requirement. In order for the lay person to use them in the hectic world we live in these techniques needed to be learnt and applied in under a minute.
I found "59 Seconds" to be a refreshingly honest book. Unlike many postmodern motivational books or films, Wiseman does not fall over himself to correlate obscure teachings. He simply provides the data, and when someone, such as Freud or Jung, presents information that is blatantly wrong he calls them on it. Likewise you don't get the feel that Wiseman is setting out to tear every book or idea that has preceded him to shreds in order to push his own philosophy. Much of the research he presents comes from other psychologists all over the world, and generally from data that has been drawn from decades-long experiments. Interestingly just as certain wacky ideas that have somehow become popular and even influenced public funding or legislation are soundly exposed; other claims, such as the benefit of complimenting your partner found in the original self-help book "How to Win Friends and Influence People", have been soundly proven to be effective. Likewise, much of Stephen Covey's stuff I was relieved had stood up to scientific scrutiny, although not all and Wiseman does not reference him.
Having sung this book's deserved praises, I consider myself to be a rational sceptic. I am not convinced by everything presented and will be interested to see if an updated edition will continue to endorse all the findings. After all, that is the beauty of science!
Laced with the dry humour we have come to expect of the celebrity sceptic or scientist, and designed to be read in bite-sized chunks it is not a heavy read. It is full of proactive and practical exercises for you and your friends to try out, and as with his previous book "Quirkology", there is much in here that makes for interesting conversation.
If you enjoyd this review please vote for it on Dooyoo and Ciao
To buy "59 Seconds" and other works referenced in this review please click on the below links: