Strength Through Error - Review of Being Wrong by Kathryn Schulz 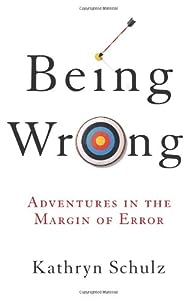 Cover via Amazon
When was the last time you admitted to being wrong about anything? It is a question that journalist Kathryn Schulz has pondered for some time, so much so that her book, "Being Wrong: Adventures in the Margin of Error", appears to be a veritable bible on something she calls "wrongology". This work investigates, dissects and embraces the whole concept of wrongness, letting no one off the hook in its research and conclusions. Being fully aware of the many ways that error has helped shape the way we progress as a species, she takes first half of Alexander Pope's famous idiom "To err is human" literally and explores the truth of this statement at great length. As Schulz, explains in her opening chapters this is not book about forecasting errors, but more about how we as deal with errors and how we can use them to our advantage.
The book is divided into four parts: "The Idea of Error", "The Origins of Error", "The Experience of Error" and "Embracing Error". Each part is divided into different numbers of chapters. The first and fourth parts only have two chapters a piece and act introductory and conclusive bookends to the whole piece. Schulz's tour of the way error affects and changes us as human beings is contained within the two meatier parts, containing six and five chapters respectively. Despite coming under the category of "Popular Psychology/Philosophy" the whole book is handled like a scholastic work. It is footnoted on many of its pages to provide fascinating additional information on certain case studies and has meticulous endnotes to provide all of the book's reference material.

Other relevent books you might also enjoy as a companion to "Being Wrong":

On our capacity for irrational belief and superstition: