The Invisible Man - review of a classic novel 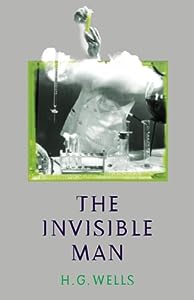 Cover of The Invisible ManA strange series of events commence in the village of Iping, West Sussex, when a mysterious stranger arrives and lodges at a local inn. The man's face is swathed in bandages and he wears huge goggles and a wide brimmed hat along with a thick cloak and gloves. He is reclusive and hides himself away in his rented room. Soon after his appearance a series of mysterious burglaries take place. Curious about the stranger the innkeepers look into his room only to see his clothes strewn across the room and the man nowhere to be seen. Suddenly his furniture seems to come to life and flies at them. Before long the people of Iping discover they have been visited by the incredible and insane Griffin, the invisible man, an individual who has terrible plans for the entire human race...

My first proper encounter with a proper "Invisible Man" story came in the form of the BBC's 1984 television series. I cannot say I relate it to the happiest of memories. I was aired on Sunday night during our colder months and only served as a mild diversion that the first day of school started tomorrow. However, it was the most faithful adaption of the book and I kept tuning in every week. Many years later and having seen several adapted and too many inspired works, I finally got round to reading the original novella.

Along with "The War of the Worlds" and "The Time Machine", "The Invisible Man" is the best known work of H.G. Wells. First published in serial form in 1897, the same year as Bram Stoker's "Dracula", it also contributed the penultimate horror icon of the classic era, joining Robert Louis Stevenson's "Mr Hyde" and Mary Shelley's man-made monster in "Frankenstein". However, unlike its immediate contemporary and those that preceded it, Wells' book does not draw out scenes with extended exposition. I have seen the original story being described as "dull" by a cult TV website, which makes me shudder to think what said reviewer would consider just about every other Victorian novel!

Wells certainly understands build-up, but he doesn't waste anytime in getting to the point. We more or less get straight into the strangeness of the story from the very beginning and the mystery unfolds at a rapid rate before the lead character eventually tells of the events that led him to become invisible. Then it's straight back into the action, building towards an exciting climax and even a mildly teasing epilogue. In this respect Wells' novella was ahead of its time.

It is this lack of portentousness that makes "The Invisible Man" a refreshing read for those accustomed to most Victorian fiction. This work does not contain the best characterization the author has to offer, but this doesn't seem to be Wells' intention. The lead characters don't have full names and even the back-story on the eponymous antagonist kept to a minimum. However, there is a philosophical heart at the centre of the work. Like Plato, Wells is arguing that if a man can no longer be seen he would feel he no longer needed morals. Nature versus nurture was a debate close to Wells' heart and being an ardent socialist, he felt that the common man kept each other in check. Griffin, a once brilliant man, is easily lured into vices like stealing and murder once he acquires a distinct advantage over his fellow humans. This then leads him to have views of world domination.


"The Invisible Man" is commonly referred to as an early science fiction novel, but you can see why filmmakers saw it as a horror. We fear what we cannot see and fear of the dark is perhaps our oldest evolutionary fear. The idea that there is a monster who doesn't even need to hide in the shadows but can be anywhere without us seeing him is a pretty scary concept. Wells understands this too and he has Griffin taunt his former colleague with this thought in the story's creepiest scene.

"The Invisible Man" is an entertaining yarn. It's not really what you would call an action adventure, lacking the international chases across exotic locations featured in "Dracula" and "Frankenstein", but it keeps rolling along without any sense of padding or needless conversation. It has a moral core, but has no pretentiousness. Some might say that its intentions are perfectly transparent, but even I would have trouble lowering myself to that kind of pun!