The FIRST House on the Left - Review of "The Virgin Spring" 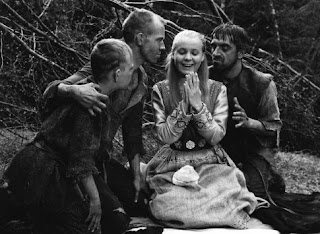 A young Christian girl, Karin (Birgitta Pettersson) embarks on a journey to take the candles to the local church - a task only befitting a virgin of pure spirit. She is accompanied for part of the journey by her pregnant foster sister, Ingeri (Gunnel Lindblom) who secretly worships the Norse god Odin and has jealously wished a curse on Karin. On the journey the two part company and Ingari encounters a one-eyed man who causes her to flee in terror. Meanwhile Karin encounters two shepherds and a boy. What follows is a cycle of vicious violence and retribution that will leave Karin's distraught father (played by Max Von Sydow) praying for redemption...

I feel I must apologise first for any spoilers I might inadvertently blurt out in my review/examination of this classic picture. However, in my humble defence this is a film based on a traditional moral tale and revealing the beginning middle and end is about as harmful as telling you the full plot of Cinderella before you see Disney's interpretation. This is really a film about how the story is portrayed, interpreted and executed than the actual plot.

It is perhaps a little sad that many who seek out "The Virgin Spring", including me, do so because of its tenuous connection to Wes Craven's début exploitation flick "The Last House on the Left". Craven has made some very impressive horror pictures, but "Last House" wasn't one of them despite the odd reverence many horror fans bestow upon it. However, tenuous connections, particularly those that link different levels of art are an indulgence of mine. Interestingly Bergman's story has its roots in the medieval ballad, "Töres döttrar i Wänge". This traditional verse tells the story of three young maids slain on their journey to church by three highwaymen. Three wells spring up where the three girls are killed. When the highwaymen try to sell the girl's clothes to the girl's mother, she tells her husband who dispatches two of them. The surviving one reveals that they are the sons of the couple and were thrown out into the wild to fend for themselves as children. The father then repents and vows to build a church to atone for his crimes. There are fewer twists in Bergman's tale and the director is clearly more motivated to ask religious and moral questions rather than to go with the simplistic message of the ballad.

The film has been called nihilistic. I am not sure if this is entirely accurate. There is a cycle of repentance and possible redemption for all the characters, if not in this world then in a spiritual one. I would argue that if we consider this to be nihilistic then so is the Bible. There has also been criticism of the character of Ingeri, a character purely of Bergman's invention. Some critics have said she doesn't serve a purposeful function for the film's narrative. I couldn't disagree more. In many ways, she is the most interesting of the different characters and presents both positive and negative comparisons with the Christian religion. Ingeri provides a different perspective and commentary on this Christian folk fable. Despite what one review said on a horror review website, Ingeris clearly does show strong signs of remorse and her actions later in the film show her repentance. I don't feel we need an on the nose full-blow confession or soul-bearing soliloquy for Gunnel Lindblom to show her feelings after the terrible crime. In fact, she works well to show several important themes in the story. Ingeris worships the old religion, then dying out, and is the opposite of her foster-sister, although not evil. This is evident in her physical appearance, faith and attitude to life. Ingeris's bad experience with a one-eyed stranger is clearly a comment on her god, the one-eyed Odin. Her infantile and jealous curse is perhaps a comment on being careful for what you wish for or the nature of the old religion - not that Christianity is presented in an entirely preferable light. On the upside Ingeris is a survivor, but her self-preservation might go a little too far in her unhelpful if anguished witnessing of the crime that befalls Karin.

Unfortunately it has been too often boiled down to shock-for-shock sake pictures that tend to go one of two ways. We get the ultimate logical conclusion of visceral nihilism in the very empty "Last House" clone "Chaos" or we get wish-fulfilment vigilante pictures like "Death Wish" and its imitators. Craven's message in "Last House" might have been thought provoking and he certainly proved that he could do a better job with it in later films ("Hills Have Eyes" and "A Nightmare on Elm Street"), but his initial crude execution is the virtual opposite of Bergman's picture in terms of quality and all the more reason why patient fans of atmospheric cinema should give "Virgin Spring" a chance.

It's subtitled, in black and white, moves at a slower pace than any of its lowlier imitators and has all the obvious restraints one would expect from a European film made in 1960. However, whereas "Last House" is an exploitation film I am baffled as to why this film ends up getting review on horror sites. It's a moralistic period drama. Yes, it does have some very effective scene of menace and the rape scene, although tame by today's standards, still carries all the emotive wallop of the callous and brutal world it represents. Whereas Craven's picture was crudely shot and badly acted, Bergman's picture has great cinematography by Sven Nykvist (which remind me of Henning Kristiansen's cinematography in 1971's "King Lear") and a strong cast of actors led by the ever-impress Max Von Sydow. "Virgin Spring" has a folkloric almost enchanted beauty that perfectly juxtaposes the dark aspects of the picture and recalls feelings of the primitive fairy tale. Again, it reminds me of another later British film, "The Company of the Wolves".

"Virgin Spring" is a beautifully shot, expertly directed and convincingly well-acted picture. The questions being asked "How could a god allow such evil to happen in his world?" is a question that is asked every single day and does not just challenge the faith of Christians. On this note "Virgin Spring" now joins my list of truly thought-provoking films made by one of cinema's great visionaries. Don't forget to check out Jamie Clubb's main blog www.jamieclubb.blogspot.com