Magical Realism at its Best! - A Review of Angela Carter's "Bloody Chamber"


Angela Carter was one of the boldest writers of the 20th century. Championed by feminists, Carter is not the usual PC promoting puritan that became a cliché in her time. Instead she strengthened female role models through her own imaginative ideas and often sourced through real evidence. She did this without diminishing other male characters in fiction; male and female villain roles can be equally treacherous, brutal and nasty. Her research into Gothic fiction and, in particular, folk stories reveals this best. This short collection of stories served as the source for the screenplay she wrote, "The Company of Wolves", one of the most startlingly original films of the 1980s. In Carter's works, characters familiar like Red Riding Hood do not overwhelm the male characters rather they compliment them with a different and yet equal strength.


There is a wonderful feeling of unrestrained exploration in Carter's storytelling. The collection does not fit any set pattern. Carter seems to write with a great sense of abandonment and freedom.

and the Beast gets two versions and Red Riding Hood gets three, but Snow White barely gets a page. Some fairy tale themes are common, others are not so familiar. Tones change from the bawdy and amusing Puss in Boots to the very disturbing and poetic aforementioned Snow White influenced Snow Child to the Sadeian inspired horrors of the book's titular tale.

There is no set message, but the flawed characters do not fight a simple battle of good versus evil. Rather we get a feel that "evil" is just the nature of things and the role of the individual is to decide whether they wish to be the proverbial hammer or anvil. Feminism has often been bundled together with militant movements. I often feel it is done a disservice and I cannot imagine a latter day Mary Wolstonecraft approving. Carter's ideas have about as much in common with her radical contemporary, Valerie Solonas, as Martin Luther Jnr's ideas have with Elijah Muhammad. She preaches a far more collaborative approach to feminism more in line with her views on nature, which is comparable to Patrick Moore's collaborative approach to environmentalism. 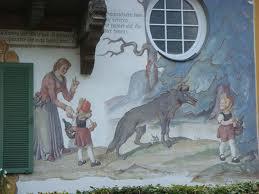 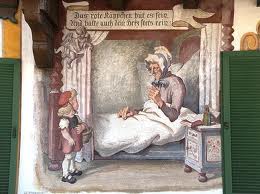 Folk and fairy tales derive their strength from being able to explore human nature unhindered. Carter didn't like her works to be described as "adult fairy tales" and saw them more as moral guides in line with the way This is all done via the vehicle of magical realism, a device that seems less forced or pretentious as outright surrealism. The Bloody Chamber shows that Angela Carter was undeniably one of the best at conveying these ideas - visions and dreams often locked in our childhood consciousness - back to the adult reader or listener.

My thanks to Julie Dixon Goin for her photographs of the beautiful Red Riding Hood mural featured in this review.

If you are interested in the item and material mentioned in this review and would like to support this blog, please purchase them through the links below. It won't cost you any extra that you would normally spend on the items.