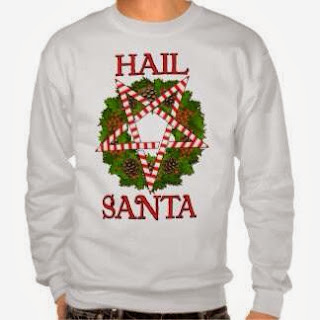 
And lo the child did feel the Christmas parcel with dread and he knew it was soft. The child's feelings of horror did fill his very soul. For he knew that this was a knitted Christmas jumper his grandmother had made. He knew that he must weareth this garment as if he were a medieval monk burdened with a cilice or hair shirt. Worse still, these garments did bear revolting images of the festive season designed to inflict their jolliness on the rest of us. The boy did feelith like the village idiot, marked out by this curse, his chest bearing a stupid looking reindeer or images of Christmas trees that looked like the graphics from a ZX Spectrum computer game. A feeling of guilt would force the poor boy to wear this burden throughout the day, although it did mortify his tender skin and near garrotte his infantile throat.


And lo it came to pass that a great madness descended upon the land. This madness was known as the "1980s" and it did vomit forth many ridiculous things. The signs were all there that craziness had arrived. Top of these were the smiley faced TV presenters who inflicted the visual horror of the Christmas jumper upon us all as they used them to highlight their stupid smiles as they demanded all viewers to be jolly. Little did we, the children of this era realize that the snow that was making many of these intrusive beacons of sickly happiness keep a perpetual grin was a type they did inhale through their noses. As a penance for their debaucheries these jolly presenters were being forced to wear Granny's sick punishments and broadcast their shame across the world. But lo, the many viewers did not understand this sign. Instead they took to wearing these most unholy and wretched items of clothing that would ravage their skins and slowly cut off their carotid arteries.

And lo not realizing that the 1980s were partly a massive joke, the 2010 generation would embrace all that had been popular at that time. Appropriately made from the coats of an animal known for following, the masses did once again don these most accursed items in their sadomasochistic celebration of festive kitsch. And upper middle class idiots called Cuthbert would force their fake jolliness upon more sensitive parents at Christmas nativity plays or Christmas parties, just as their rakish aristocratic ancestors had done upon defenceless milk maids. These were dark times for humanity.

But lo those who had escaped the influence of the fashion dictators did pray for snow. For they did realize that the Christmas jumper and its unholy harbinger of doom, the detested Santa hat, made good snowball targets of Cuthbert and his fellow bleaters. These thoughts did warmeth the festive heart and much rejoicing was had within the dark imaginings of the not-so-jolly.

Have a great Newtomas, extended Winter Solstice and Saturnalia, my friends Thanks to Dave Stretch for posting up the only Christmas top I would consider wearing and prompting me to write this rant.