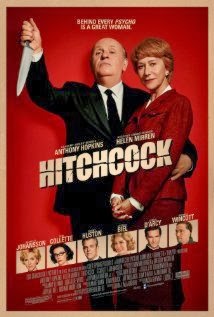 There are many ways to approach a biopic and "Hitchcock" goes for the easiest one. It's a choice that results in success for the most part. By opting for a pivotal moment in the main protagonist's career, writer John J. McLaughlin was not forced to wade through Alfred Hitchcock's imposing career, cherry picking what would make for a good dramatic narrative. Life, not being a piece of dramatic prose, is rarely a linear path. It takes a bold director and writer to tackle the full biopic approach and the result is usually what seems to be little more than a dramatized resume that fails to deliver an interesting central theme.

The single episode approach loses the epic feel of the comprehensive biopic, but is effective for good story and character development. For example, it was used very well in Michael Mann's "Ali" and Christopher Menaul's "The Passion of Ayn Rand". It's an approach that seems to suit director, Sacha Gervasi, who is best known for his award-winning documentary, "Anvil! The Story of Anvil". The biopic is, in many ways, the cousin of the cinematic docudrama and Gervasi transitions into this genre very well. There is certainly nothing dry about "Hitchcock". Being known as a documentary director, Gervasi might be demonstrating good restraint on his own ego - something that could rarely be said about Alfred Hitchcock - in his decision to try to mimic the "Hitchcockian" style. I can imagine there was a temptation to do this, given the tension involved during the build-up to get "Psycho" from novel to big screen and with Hitchcock's huge reputation on the line.

Gervasi's resulting work is very playful and has an understated surrealistic streak in its analysis of Alfred Hitchcock's psyche. Here the great director, known as Hitch to everyone, finds himself talking over the progress of his movie and its various obstacles with an imaginary incarnation of real-life inspiration for the novel, "Pyscho", Ed Gein, played by the great Michael Wincott, one of Hollywood's most underrated actors. Key moments of Gein's life are presented up to mirror different stages of the turbulent journey Hitch took towards his movie's completion. Wincott is a very convincing Gein, competing even with Steve Railsback's uncanny portrayal of the perverse murderer.

This is an interesting juxtaposition that a few might find disturbing. We have what many, including me, consider one of the world's greatest movie directors conversing with one of history's most iconic killers. Both have independently exerted a huge amount of influence over popular media. Hitchcock's films set the bar and established a bonafide style for suspense thrillers, despite his films being very diverse with their themes and storylines. Gein, of course, inspired at least three huge horror classics, "Psycho", "The Texas Chainsaw Massacre" and "The Silence of the Lambs". The fact that two of these titles were originally successful novels, as well as very influential movies, only goes to show how deeply Gein's morbid legend has ingrained itself into American culture. Having said this, it is refreshing to see the film show Hitch remarking on the poor quality of villain the real Gein presented. Demonstrating the huge chasm of difference between the pathetic figure of real life demented murderers and their demonic celluloid representations, we hear Hitch referring to Gein as resembling Elmer Fudd. Despite John J. McLaughlin's choice to dabble in such dark concepts, the film never loses its playful edge. These surreal asides are linked to the film's prologue and epilogue, which mimic the darkly comic introduction and conclusion Hitchcock used in his television series, "Alfred Hitchcock Presents".

However, surprisingly the film's success is not down to the person playing the titular role. In fact, I would go as far as to say that the title would be a misnomer if it weren't for the interpretation that "Hitchcock" was much more than the man who bore the name. The institution of Hitchcock was a double act consisting of Alfred Hitchcock and his wife, the talented editor and his former boss, Almer. Therefore it is something of an extreme exaggeration of this couple's dynamic to say that Helen Mirren's Almer trumps Anthony Hopkins' Alfred Hitchcock. Hopkins said he tried hard not make his portrayal of Hitch as a caricature, but sadly the great actor fails in this precise act. The make-up doesn't help, but we could see beyond that if Hopkins didn't insist on constantly presenting us with an impersonation of how Hitch came across on camera. I am not saying it isn't a tall order, given how hard Hitchcock worked on establishing his egocentric presence, but Wincott's performance as the hillbilly, Gein and James D'Arcy's Anthony Perkins are good references for how it can be done. Both show a good balance of reserve in their performances of personalities that had distinct mannerisms. D'Arcy, in particular, gives us an ambitious and anxious Perkins auditioning for his defining role and even though it is far from being an exact impersonation you buy into his portrayal. Having said this, Hopkins just about manages the role, if a bit self-consciously, and both the other actors' performances come alive due to having the great man to bounce off in their scenes.

However, bringing me back to the point I touched on in the previous paragraph, it is Helen Mirren who steals the show. She plays Almer with depth and affection. The role isn't straightforward. A lesser actor and writer would have turned her into Hitch's sole voice of reason and conscience, the Fool or Cordelia to his King Lear. Instead we see a complex woman who struggles to deal with her husband and creative partner's huge ego. Hitch's obsession with his leading ladies is also touched upon, but wisely not overplayed, although it adds to our sympathy for Almer. Almer's desire for some identification and appreciation leads her away from the marriage and partnership. She might be the only person who could rein Hitch in, give him the support he needs and ultimately do the world's most under-rated task of editing his film, but we see that she will never have his vision and has her own fallibilities. The screenplay provides us with a strong argument that the "Psycho" we know today was the result of the collaborative effort that was "Hitchcock". Their love is portrayed as chaste and very conservative yet when Hitch does show Almer affection, Mirren is able to convey a wonderful sense of restrained warmth that is more emotive in the viewer than the vast majority of superficial romantic schmaltz out there today.
Don't forget to check out Jamie Clubb's main blog www.jamieclubb.blogspot.com