Stick to the Path - A Reflection on "The Company of Wolves"

Rosaleen (Sarah Patterson) is a young girl asleep in her bedroom. As her angry older sister (Georgia Slowe) bangs on her locked door for stealing her make-up, Rosaleen dreams of living in a fairytale village where her sister is killed by wolves. Here she lives some of her time with Granny (Angela Lansbury) who tells her about werewolves and how to avoid life's dangers. Based on several of Angela Carter's short stories, contained in her "Bloody Chamber" compilation and her radio play, "The Company of Wolves", this is a hugely symbolic film dealing with various themes regarding a girl's journey into womanhood. 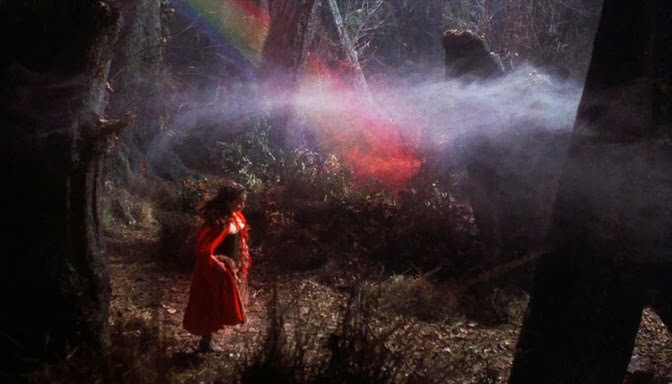 First off, let's really try to forget the Twi-S**** styled rendition of the Red Riding Hood story that even poor Gary Oldman couldn't save. For the best adult interpretation of the tale look no further than "The Company of Wolves". Based on selected short stories from Angela Carter's "The Bloody Chamber", including her two versions of the Red Riding Hood fairy tale, "The Company Wolves", is a surrealist fantasy that rarely fails to impress.


Secondly, when it comes to the fascinating shape-shifting favourite of folklore and horror, the werewolf, there really aren't that many great films. Most are really, really bad. However, the early '80s saw three of the best - "American Werewolf in in London", the original "The Howling" (the sequels descended to depths no audience should have to endure) and this wondrous piece of cinema. By working closely with the great author of the short stories this film is based, we received a truly original werewolf film. 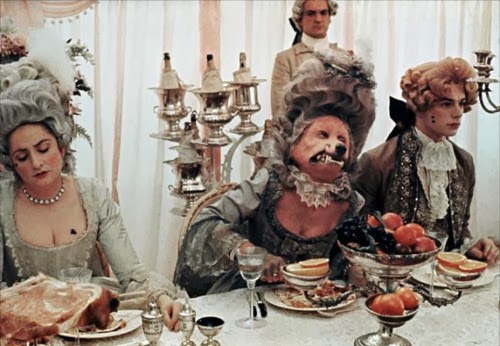 Neil Jordan is an excellent director with a wide range ("Mona Lisa", "Interview with the Vampire" and "The Crying Game" give you an idea of the man's breadth of expertise) and his recent work on TV ("The Borgias") is testament that his abilities have not waned over time. Jordan had a genuine love for Carter's incredibly lucid and witty surreal ideas not to mention her very insightful feminist philosophy. Like just about anything you read of Angela Carter's, the film plays a very clever balancing game between entertaining classic narrative and expressive surrealism. It neither falls into the very easy pitfalls of the werewolf horror genre, where the best often trip, nor over-indulges into pretentious art-house snobbery.

Rick Baker is often considered to hold the gold when it came to creating the best full werewolf transformation sequence as shown in "American Werewolf in London". The scene deserves all the praise it gets and I love Landis's idea that it is something of a metaphor for the mental agonies some males experience during adolescence as their bodies make drastic changes. Jordan's film presents Carter's other side of the story. Here the lead protagonist is a girl making the change to womanhood. The wolf transformation takes Carter's warning of male predation literally - the most dangerous wolves were those that grew their hair on the inside. There are two particular transformations that show the literal wolf within and they're both especially memorable. 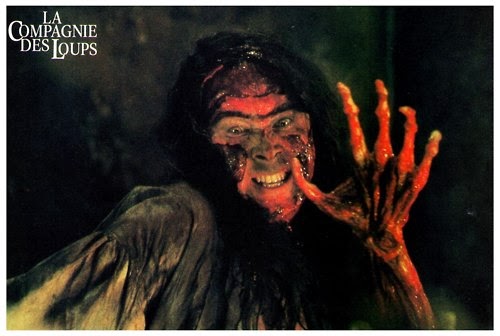 I first, rightly or wrongly, viewed the film as a child. Seeing the Red Riding Hood story ripped apart shocked me and moved me. It was a coming of age for this young boy of sorts. The film does well to put over Carter's brand of feminism. She presents the image of the adolescent girl being guided to stay within the boundaries of the path by her patriarchal family and community, and to be wary of the males who would prey on her. However, Carter asks the scarier question for such a society, what of the freedom the wolf presents? What if the girl does not want to be kept within the strict confines of her secure yet regimented order. What if she were to covet the mantle and the spirit of the wolf?

Carter's sexually charged and liberating ideas are given due respect and homage by Jordan, who had the author on board during the filming. Most horror, including the greats, tend to carry conservative messages through them. Some are outright propaganda for religious establishments, echoing the type of repressed imaginations of prosecuting clergy that led to the lurid and colourful confessions of numerous apparent witches, necromancers and oculists of the past. We have seen such horrific depictions of the supernatural and the macabre being used to illustrate the works of fundamentalist religious writers like Dante and Milton. Likewise the great classic horrors like "The Exorcist" were supported by the Catholic Church and the original fiction written by authors who believed in the fantastical ideas being presented. Unfortunately more liberally minded writers and directors tend to produce a lot of dross. Without a type of moral compass at the heart of a horror the anarchy can come across as ineffective. The "Hostel" franchise is pretty terrible because its leering direction seems clumsily self-indulgent. Other horrifying works that do not condemn the horror, such as "Salo" (based on Sade's work, which Carter was greatly influenced by), are not films designed to strike fear into the audience. I argue that this is a horror - hugely under-rated for these merits on its release - that works despite defying the conservative messages present in most of the best of the genre 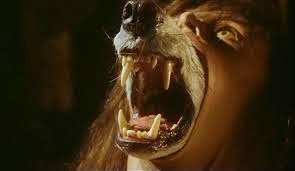 Besides its dated sounding synthesizer soundtrack (a particular problem that taints many period classics made in the 1980s) and some the more dated elements of the animatronic wolves (although give me a ropey wolf dummy over a badly executed computer generated one any day), my only real gripe with "The Company of Wolves" is its framing device. It didn't need to be presented as a dream. There are some great moments that reflect the toys of childhood scattered around Rosaleen's bedroom, but these could have been handled in a different way. Carter's magical realism is admirable and as the story steps into surrealism I resent it being justified by the reminder that this is all the imagination of a young girl. Not to spoil anything, but the film's ending, although visually one of the most stunning in the picture with Gill Radding's excellent Alsatians doubling as wolves*, tries to somehow take this back with a dark twist in the real world, but doesn't quite work for me. Other framing devices contained within the dream are far more effective. Hearing Granny tell us traditional tales of predatory werewolves that seduce unfortunate virgins progress into stories 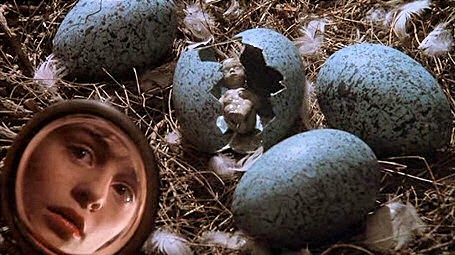 "The Company of Wolves" takes the viewer through different points of view as we follow Rosaleen on her journey to womanhood. We empathize with the fear of threat to the order - in this instance the threat to the alpha males who protect the females and the elderly women who do their best to make sure young girls learn the rules to co-exist comfortably in this ordered society. We rightfully fear the predatory outside who seeks disruption for his own greedy ends. Yet the film also provides us with the budding recognition of temptation, leading us first to a fear of the self for feeling them and finally to the point of decision. Rosaleen's transformation takes her from the point of innocence to the acquisition of  knowledge and experience. Having Carter involved in writing the screenplay, which had its origins in her the radio play she adapted from her stories, meant that we get a further exploration of her ideas and some original metaphors to help mythologise Rosaleen's journey. Never one to stint on symbolism, this journey involves such vivid scenes as when Rosaleen discovers rouge, a hand mirror, feathers and four eggs containing the figurines of men in a stork's nest (traditional symbol of fertility) prior to her fated journey to Granny's house. On this journey she will encounter the embodiment of her patriarchal order's fears. Here Jordan and Carter mesh the image of the rescuing huntsman - the traditional masculine representation of a knight in shining armour - and the wolf - the wild outside corrupting force of the enemy male predator.

"The Company of Wolves" has a great cast - Angela Lansbury gives the film's most memorable performance - and suspends belief comfortably all these years later with its well-made sets and animatronics. Neil Jordan paces the screenplay he wrote with Carter well, leading us to a satisfactory conclusion in the dream story whilst working on a variety of fears in a more subtle way than the majority of horror movies. 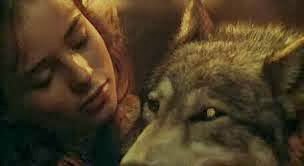 *This was the film where my friend Gill got her first taste of working with animals in film. It should be noted that the job was Roger Farr's of Academic Animals who supplied two real trained wolves for some sequences.


My review of "The Bloody Chamber".