The British Playboy - Review of "The Look of Love" 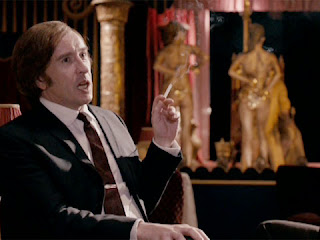 This is the biopic of Paul Raymond (Steve Coogan), the British millionaire publisher, club owner and real estate developer. “The Look of Love” takes a reflective look through the eyes of Raymond after he attends his daughter’s funeral. We see his rise to success as a night club owner and publisher of “Men Only” after discovering how to create publicity stunts in the 1950s. The film looks at the eventual price Raymond will have to pay for his self-indulgent lifestyle as a playboy and the impact it will have on those closest to him, his wife Jean (Anna Friel), his lover Fiona (Tamsin Egerton) and especially his daughter, Debbie (Imogen Poots).

Firstly, I submit to you a confession. I want my readers to feel confident that my reviews are as fair as possible and although we have our biases and prejudices, I do my very best to be dispassionate, give praise and critique where it is due, and review in context. My confession is that I have several strong connections to this particular film. My hope is that my review will provide some insight rather than tarnish my opinion. My father appeared in the film, playing the part of a lion presenter, and he is listed sixth in the cast. Being a biopic, my father’s character is rather strange, as it is fictionalized replacement. He is called “Jim” in the film, which is his real name, whereas in the real-life the presenter was called “Nikolai” and he presented Dennis Rosaire’s lions. I know the Rosaire family very well and they feature a lot in my first book. Secondly, I knew a fair few circus people who worked with Paul Raymond and knew him well, they include members from the Sandow/Konyot family and the Smarts family. I never met Paul Raymond. This was the second Steve Coogan film we worked on that year.

I and the rest my father’s staff saw the film very late during its theatrical release. No red carpet premiere for us. However, the setting was very nice. We watched it at the Chipping Norton Theatre, which is a very pleasant and atmospheric little theatre in the Cotswolds. Somehow the wooden seating and scenery added a veneer of decadence to the film we were watching. Despite the amassed wealth of Paul Raymond – the film has him down as the richest man in the UK at the time of his death – and his huge properties, the setting helped convey the atmosphere of the pokey Soho clubs that we see in the picture.

“The Look of Love” is familiar territory for Steve Coogan and director Michael Winterbottom, and the whole film has this sense of comfort throughout. The duo had successfully paired up in the very entertaining “24 Hour Party People”, which was the biopic of television presenter, journalist and record label owner, Tony Wilson. Winterbottom is known for working with the same actors, so this is of little surprise. Nevertheless, besides the clear smooth flow that underpins the action of “The Look of Love” Coogan and Winterbottom do not attempt to remake their previous effort, which must have been tempting. The parallels between Raymond and Wilson are evident. Both were heavily involved in aspects of British culture that promoted hedonistic and drug-fuelled lifestyles. Raymond, in many respects, was Wilson’s prototype. Both understood sensationalism and how to turn the underbelly of British society into financially successful enterprises.

Steve Coogan has done well to keep his straight acting roles going whilst still going back to comedy and even the role that made him, that of Alan Partridge. Although he has used accents in roles, Coogan does well to keep things simple and is very good at generating sympathy for his character. His performance in this film is not marked down as very special, but I think the critics do miss something. Paul Raymond’s actions, it might be argued, are worse than those of Jordan Belfont of “The Wolf of Wallstreet”. Belfont, for all his selfishness, ruthlessness and law-breaking, did not help actively contribute to his child’s drug dependency and subsequent death. Nevertheless, at the end of Scorcese’s film Leonardo DiCaprio’s performance provides us with little sympathy for the man outside the fact that he had energy and charisma. Maybe it is because Paul Raymond’s career was all about entertaining people whereas Jordan Belfont’s was about ruthlessly taking their money with no interest in a happy result for a client. Maybe – and this might be closer to the crux – it might be because Coogan and DiCaprio were simply portraying very different characters. However, it might be that Coogan’s ability to show vulnerability and love alongside a selfish desire to indulge in a playboy lifestyle trumps even DiCaprio’s triumphant performance.

Michael Winterbottom’s style is certainly laid back and it works with source material. We are taken through the development of Soho during its most formative years in the 20th century as well as the emergence of British mainstream pornography. All of this is done with a steady hand and a wry smile at the censorship laws, and the many ways surface British frigidity was played against to ensure successful sensationalist publicity. This is in stark contrast to Miloš Forman’s more joltingly political “The People Versus Larry Flint”. Maybe this is just the British nature of the piece – and it is a very “British” movie – but I still think Winterbottom succeeds in allowing the audience to feel they are witnessing the real life behind the sensationalist life of his lead character. Having known and worked with and around this type of environment I can testify that the director gets that tone right. Unfortunately that might not quite match up to the expectations of Hollywood, who want their hedonistic millionaires to be the 24 hour embodiment of the public persona we all see.

The cinematography of Hubert Taczanowski is perhaps one of the film’s weaker points. The sets and costumes are great and a lot is done to help propel the audience back to Paul Raymond era of the ‘50s, ‘60s and ‘70s. However, there is definitely something missing through the camera lens. We don’t’ get the punch that movies like “Scandal” provided when it cast its eye on the swinging ‘60s or even the restrained view of the ‘70s that we saw in “Cemetery Junction”. The soundtrack is well chosen, although it doesn’t dominate in the way most period films covering the second half of the 20th century do.

“The Look of Love” is an underrated biopic with a good cast, an excellent starring performance and very interesting subject matter. It keeps a relatively light tone despite touching on very tragic matters and never loses its sense of humour. The film seems to have not been successful in lighting up the box office or the critics in any way, fading into obscurity. This is a shame. All the performances are strong even if the visuals aren’t especially striking. I can’t pin all of this on the somewhat drained colouration of some shots or the fact that the film didn’t go in for the dramatic Scorsese/Prieto style sweeping and panoramic shots that worked so well in “The Wolf of Wallstreet”. Sadly it might be Winterbottom’s desire not to hit us with sharp scenes echoing Raymond’s sensationalist side, but to opt for a gentler approach to show us his humanity and, despite all his selfish flaws, the love he seemed to genuinely possess for his family, that made it less attractive to the mainstream viewer. Don't forget to check out