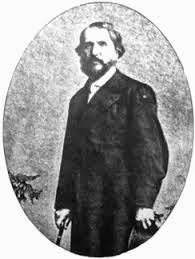 “But dreams come through stone walls, light up dark rooms, or darken light ones, and their persons make their exits and their entrances as they please, and laugh at locksmiths.”

I am delighted to see that Google has decided to celebrate the 200th birthday of the Irish author, Sheridan Le Fanu, today. Le Fanu was a prolific writer who is best remembered for his mystery and horror fiction. Unlike other several other Gothic writers of the 19th century, such as Mary Shelley and Bram Stoker, Le Fanu was totally dedicated to a career in writing. He studied law at Trinity College, Dublin and was called to the bar in 1839, but already had his mind on journalism. A year previously his first ghost story, “The Ghost and the Bone Setter” signposted where Le Fanu’s literary influence would lie. From 1840 he would become the owner of several newspapers and would go on to write many books and short stories.

“What a fool I was! and yet, in the sight of angels, are we any wiser as we grow older? It seems to me, only, that our illusions change as we go on; but, still, we are madmen all the same.”
― Joseph Sheridan Le Fanu, “In a Glass Darkly”

Le Fanu is known for the constant development of his works, something I find very inspiring. Later works can be seen a direct progressions from his earlier material. A lot of the clichés and standard ideas we have regarding supernatural and Gothic fiction can be found in Le Fanu’s stories, but there is still a lot that can be learned from his approach. Like one his latter day fans, the great M.R. James, he relied a lot on creating atmosphere and subtlety than going in for direct shocks. He was the master of “indirect horror”. This is much harder than one might expect and many horror creators struggle with its usage or in adapting it for drama. Many authors have chosen to emulate him and some the greatest ghost and horror story writers were clearly influenced by his approach.

My generation of geeks has demanded an almost Tolkien-esque amount of backstory and tapestry in our mythology. The development of comic books has allowed long expansions of storylines and characters and heavier demands on the creators to deliver. We might look back on previous decades of movies, comics and books, and laugh at the amount of exposition on display as fantasy writers do their best to convey ludicrous ideas to an apparently more critical audience. However, we must a good amount of this responsibility. It is a by-product of our desire to know more from what was created to stimulate our imagination.  Even space opera franchises like “Star Wars” have books with technical cross-sections on the plethora of fantasy science that is on display. I wonder how much these demands have compromised new authors who could learn from Le Fanu’s true stylistic legacy.
For example, one of the most fascinating things I learnt from listening to the commentary on the original “The Omen” was that the events in the story could all be explained without their being any supernatural occurrences. In fact, it is the plausibility of this that allows the sequels a degree of strength and we can suspend disbelief in the majority of other characters not buying into the supernatural story. If we don’t assume that Damien is the literal antichrist, the whole story could be about religious hysteria, a conspiracy, a few unfortunate coincidences and a dodgy birthmark. This is the sort of thing Le Fanu presented to his reader. He left much unexplained, leaving the reader to wonder and stimulating their creative impulses to imagine. Such an approach is not only present in horror and mystery works, but can also be a great way to tackle moral drama.

“The stream of life is black and angry; how so many of us get across without drowning, I often wonder. The best way is not to look too far before-just from one stepping-stone to another; and though you may wet your feet, He won't let you drown-He has not allowed me.”
― Joseph Sheridan Le Fanu, “Uncle Silas”

I haven’t read all of Le Fanu’s many works and I look forward to correcting that folly. It is amazing to think that stories which feature all the stock Gothic clichés of decayed castles and monasteries as well as all the dreamy devices he uses to play with psychology would have any impact on a modern day reader. Yet they do and I would encourage any reader to sample his ghost stories. Le Fanu might have had a huge impact on ghost, horror and mystery stories, but his style is very hard to emulate. So far, “Carmilla” remains his masterpiece and it is as much a part of the development of modern vampire fiction as John Polidori’s “The Vampyre”, James Malcolm Rymer’s “Varney the Vampire” and Bram Stoker’s “Dracula”. The seductive female vampire of the book’s title allowed a type of sexual freedom few other mainstream pieces of literature could explore in Victorian England. The character, Carmilla, open the gates up to Stoker for the creation of his Dracula brides and is the prototype for the vast majority of female vampires we see today.

“There is a faculty in man that will acknowledge the unseen. He may scout and scare religion from him; but if he does, superstition perches near.”
― Joseph Sheridan Le Fanu, “The Haunted Baronet And Others: Ghost Stories” 1861-70