After Magna Carta "Sealed not Signed" 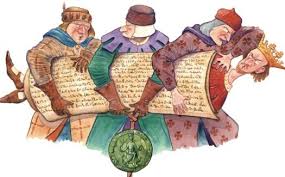 So, my busy schedule puts me at a loss once again to produce anything particularly meaningful on yet another very important historic day. 800 years ago this week, on 19th June, King John and 25 rebellious barons shared a charter drafted by the Archbishop of Canterbury that was intended to restore peace between the crown and the aforementioned angered noblemen. John would give the charter his royal seal, but contrary to many dramatic depictions, including the one I describe later, he could not be forced into signing it. In essence, Magna Carta would protect the barons from being subject to limitless taxations by the king and also from unjustifiable imprisonment. The charter was radical document for its time and neither side stood by their commitments, leading to the First Barons' War. It would be called upon in response to the actions of another rebel, Simon DeMontford. DeMontford would covene a "parley" at Kenilworth Castle in 1264, consisting of demoncractically elected knights. This would be the first Parliament. He would eventually usurp the crown for a year, becoming a prototypical Oliver Cromwell before he was overthrown and killed by Henry III's forces. Henry would re-issue and re-edited version of the Magna Carta.


The Magna Carta sewed the seeds for English and eventually British democracy. Its strongest idea was that no one, including the king, was above the law of the land. Such a powerful dictum would be put to its ultimate test when Cromwell's Parliamentarians brought King Charles I to trial and, upon finding him guilty of treason, executed him. Magna Carta's legacy underlines the core principles of democracy and The Universal Declaration of Human Rights 1948 is often described as the Magna Carta of our age.

I come across references to Magna Carta all the time. I discussed it in my review of Melvyn Bragg's "12 Books that Changed the World" (read here). The Henry III/Simon DeMontford drama is recounted in my review of "A Great and Terrible King".  However, my fondest reference to Magna Carta came via Alan Simpson and Ray Galton's Anthony Aloysius St John Hancock of 23 Railway Cuttings, East Cheam, played by Tony Hancock. Radio 2 has twice referenced it in the last couple of days. I tweeted yesterday, but it should have a place on the blog:


"Does Magna Carta mean nothing to you? Did she die in vain? Brave Hungarian peasant girl who forced King John to sign the pledge at Runnymede and close the boozers at half past ten! Is all this to be forgotten?"


The below archive review I wrote about the historical action movie, "Ironclad", displayed about as much historical accuracy as Hancock's statement.


Plot:
A medieval action film set after the signing of the Magna Carta, "Ironclad" covers the story of King John (Paul Giamatti) of England's backlash against the barons who opposed him. The ink is barely dry before the vengeful King recruits an army of Danish mercenaries to re-take his kingdom and punish those who have opposed him. This led to an all-out war and the film focuses on the siege of Rochester Castle. William d'Aubigny (Brian Cox), one of the 25 guarantors of the Magna Carta, leads his group away from the vengeful king, along with a wronged Knight Templar (James Purefoy), and to the apparent sanctuary of Rochester…

Review: "Have you ever killed a man, squire? It is not a noble thing. Not even when it is for God!"
Since the advent of TV series like “Rome”, historical action drama has taken a decidedly more adult turn and reaped the financial benefits. At the higher end we have the lavish, superbly casted, beautifully produced and cleverly-plotted “A Game of Thrones” – its sex and violence never taking anything away from its clever plot twists, intriguing character development and very quotable dialogue – and then we have bottom-feeding dross like “Spartacus”, where every scene is a vehicle to take us to the next piece of pornography. The Brits don’t seem to have fared that well. “Camelot” was a classic failure of low budget and groping for the lowest level of entertainment. However, if “Ironclad” is anything to go by, it would appear that old Blighty might still have something worth saying about adult historical action films.

Of course, when I say “historical” I mean that as a rather loose term. “Ironclad” may have the look and feel of harsh medieval England and there certainly was a siege at Rochester Castle involving William d’Aubigny, where starvation was a major factor, but that is where the history pretty much stops with this picture. Instead director Jonathan English decides to ramp up the brutality and lead us into a dark battle between a deeply vengeful King, asserting his “God-given” right to rule, and the defenders of liberty and honour.

It’s a fairly black and white affair in terms of character development. James Pureloy is adequate as the Knight Templar at the end of his term, falling in love and wanting revenge on the spiteful king. As the indomitable and courageous warrior he clearly takes the heroic centre stage, but doesn’t fare well against the supporting cast. If this was intended to be his star vehicle it was ill-advised. Brian Cox is as impressive as he ever was playing the brave and resolute d’Aubigny who proves he will stand anything to the bitter end for his beliefs and those in his charge – playing martyr to his cause and his people better than Mel Gibson ever could. Derek Jacobi weighs in as Reginald de Cornhill, who was constable of Rochester Castle. Perhaps unnoticed by the more casual of viewer’s Jacobi’s Cornhill could easily be mistaken for a coward and humourless man of power with a trapped much younger wife. However, I was impressed by the way Jacobi revealed him to be a realist and a man of no lesser sense of responsibility than d’Aubigny. Another notable is McKenzie Crook who is doing a fine job working in straight roles. Here he plays an archer on the side of the barons. Finally, Paul Giamatti gives us a ruthless, spiteful, vicious, driven and unreasonable King John that would have been more than a match for most Robin Hoods. Here and there we get glimpses of his reasoning for his ruthlessness and religious excuse we see associated with Richard I, Henry V and Charles I. Sadly, none of the female cast members stand out and it is little surprising, this is clearly a lad’s film dressed up in historically accurate settings and costumes.

However, this isn’t to say it isn’t enjoyable. The real star of the piece is the film’s director, Jonathan English. Among English’s CV is the horror film “Minotaur” and this is somewhat key. Viewers have remarked on the film’s realism, which is never more evident than in the film’s battle scenes. However, I would go one step further. For a 15 certificate, even by today’s standards, the violence is incredibly brutal and often cruel. I appreciate the floodgates have been opened since the rise of shows like “Rome”, but the film’s tagline says it all: “Blood will run!” Viewers get an eye-full of blades slicing through limbs, necks, heads and so on, often with the camera leering at the anguish and pain. This is an action film that uses the violence of a horror picture and I have to admit it is very effective. It has its moments of heroism and contains excellent fight choreography, but there is clearly an interest to showing the viewer the realities of fighting a battle.

“Ironclad” rises above most action films in many ways. It is beautifully shot, well-acted, has authentic historical settings and enough twists to keep the momentum of a siege story going. Don’t expect a character driven piece, even though it has a strong cast, but a fairly unpredictable action picture that pulls no punches when it comes to showing how fights are won and lost.