There is a highly contagious disease sweeping the globe. It has already infected numerous numbers of people in various different countries. However, the disease I am discussing is not the current swine flu outbreak; rather it is the contagion of irrational fear of the “pandemic” that is spreading at a far faster rate than any biological virus. And it didn’t take long for other parasites to start feeding off this fear to bolster their own transparent agendas.

This type of scare is obvious fuel for the tabloid media. Growing up in the UK I have seen widespread panic induced by the salmonella scare of the late 1980s, which was followed by the “Mad Cow Disease” BSE scare and then at the beginning of the millennium the petrol strike had the general public scurrying to stock pile like a swarm of fat, terrified squirrels.

Then there are other areas that are quick exploit the situation. A public health info-mercial broadcast at regular intervals on a local radio explained to everyone that one of the best preventative measures against the virus is to – wait for it – wash your hands! It never ceases to amaze me – and this comes from someone who has to regularly write risk assessments for work that involves animals – that we have to remind the general public of the 21st century in a developed country about basic hygiene. The public information broadcast seems as patronizingly dreadful as the one that was created to remind men that non-consensual sex is rape. I echo comedian Ricky Gervais’s exasperation in his “Fame” stand-up show – how have we got to this stage in our society that we need to tell people these things. On the back of the regular hand-washing revelatory message household cleaning product supplier, Domestos, saw the perfect opportunity to remind everyone of its product’s germ-killing potential and their commercials swiftly followed.

However, another type of parasite is out there too. It didn’t take long for the conspiracy theorists to misuse the information that the swine flu in question is a combination of several other forms of influenza and work it into the idea that it was manufactured as part of a devilish plot by – you guessed it – the New World Order. In an act of breathtaking paranoia, unscientific speculation and lack of any evidence whatsoever con-theos claim the swine flu outbreak is a beta test before the infamous Illiminati goes for the big one. I guess this would explain why this strain of swine flu has been proven to affect anyone in a manner that differs from conventional influenza. It is hardly anthrax!

For a succinct scientific response to this latest piece of disinformation please read this link from “New Scientist” magazine (unless, of course, you believe that all scientists that deny the N.W.O. are on the Illuminati . It includes the direct link to the website putting around this con-theo nonsense, so you can read it in all its paranoid glory. I haven’t gone into detail here because, quite frankly, it isn’t worth the effort: http://www.newscientist.com/blogs/shortsharpscience/2009/04/is-swine-flu-a-bioterrorist-vi.html

Seeing as many conspiracist’s default position is to retreat into a children's nightmare, where everything they hear on the news is linked the infamous New World Order, I thought I would leave you with a more positive and intelligent imaginary world. We go to the hundred acre wood, where paranoia has spread to Pooh Corner. 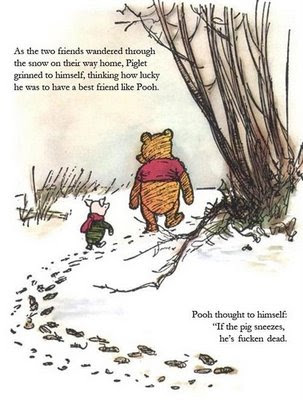