In memory of a teacher 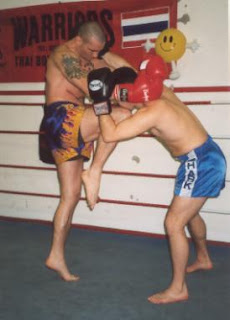 Teachers are very important to me and it always sad hear about their passing. Today, 22 April 2010, I received the tragic news that Tony Hayes had died. Tony Hayes was my muay Thai kru for an intensive year of training in Warwick. During this time I travelled several times a week, had private lessons with him, represented his club at a judging course and was a part of his fortnightly "fight club". He awarded me my "Training Instructor" qualification shortly before the club closed. Below is an article I wrote for club's website - this was before my work was widely published in martial arts magazines and just before I began Clubb Chimera Martial Arts. There is a certain naivity in the writing and it reflects a time when Hayes Muay Thai was in its hayday. I haven't edited anything for fear it will take away what a good friend of mine calls "lived experience" of the time, so please forgive any grammatical errors. I offer it as my own way of remembering one of my teachers...

Hayes Thai Boxing Club: Inspiration and Drive
“A teacher affects eternity: no one can tell where his influence stops.”