Sins of the father, sins of Man; the price of the Immortals 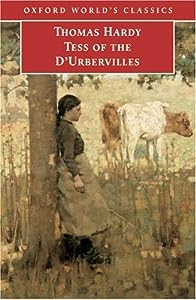 Cover via Amazon
“Tess of the D’Urbervilles” is a classic Victorian tragedy about the life of an impoverished and virtuous Wessex country girl who becomes a victim of her society and the forces of fate. Her destiny will be both in the hands of the changeable morality of her fellow humans and the consistent forces of nature.

When the rural peasant John Durbeyfield is given delusions of grandeur by a well-meaning amateur genealogist a series of events are set in motion that will spell disaster for John’s eldest Daughter. Through a misplaced a sense of guilt Tess seeks kinship with a noble family who use the D’Urberville name.

They are, in fact, no relation and a member of their family bought the name. One family member, Alec, takes a fancy to Tess and will spell her downfall in many ways. Meanwhile another man, Angel Clare, seems to be her salvation. In a world where self righteousness and hypocrisy co-exist as almost the same entity, Tess will soon have to decide whether she should reveal her unfortunate past with Alec or remain silent.
Review:

I am surprised how few people draw parallels between Thomas Hardy’s penultimate tragic novel and the Marquis de Sade’s “Justine”. Both novels focus on the plight of a completely virtuous female protagonist who is a victim of both the conventions and hypocrisies of their times as well as cruel coincidences. The major difference between them, of course, is in their execution. Despite being considered a controversial novel at the time of its release, Hardy’s novel does not use regular overt pornography nor does promote the nihilistic atheist philosophy that Sade uses throughout his works. However, there is a lot to suggest that Hardy’s book is more pagan than Christian in its view of the world and by that token more than a little critical of the theistic conventions for the time. From the May dance at the beginning to the Stonehenge venue at the end, Tess is a pawn of the “President of the Immortals” used to pay for the sins of her noble ancestors and a victim that will receive no comfort from institution of the Church.

Unlike “Justine” there is nothing you could describe as horrific in the text. However, the great horror writer Stephen King has cited Hardy as one of his favourite classic writers. His reasons for discussing Hardy when he is being interviewed about horror are interesting. King says that when you start a Hardy novel you just know everything is going to go horribly wrong. It is this pessimistic presence that comes in the form of providence in “The Mayor of Casterbridge” and fate in “Tess” that arguably makes his works possibly even darker than Sade and the Gothic novels that became popular in the 19th century. Hardy doesn’t need the overt or even implied presence of the supernatural to encourage his reader’s mind to explore uncomfortable places and ask difficult questions. Unlike the Gothic novel there are no brooding castles or manor houses and, if anything, Hardy is known for his beautiful descriptions of his beloved Wessex. This certainly comes out in “Tess” and is used to contrast the legacy of the industrial revolution, as the impoverished peasants’ miserable working days are described with Hardy’s vivid descriptions of the farmhouse machinery. This machinery is one of the novel’s most memorable pieces of symbolic imagery.

Such backdrops and themes, however, are nothing compared to the amount of investment Hardy puts into the story’s heroine. Tess Durbeyfield is not the one dimensional figure of virtue that Sade presented for his brutal philosophising. She is naïve, dutiful and loving, but she is not a weak victim. Tess endures tremendous hardship, faces her hypocrites and does eventually fight back. She is not merely a victim of her own naivety, but of both the unfair manmade systems of her time and the forces of fate. When she confronts the men in her life she speaks with the words of the sympathetic reader and we experience with her a sense of learning as she ultimately faces her tragic destiny.

I would recommend “Tess of the D’Urbervilles” to any reader who is looking for something that on a superficial level will offer insights into the plight of the impoverished countryside residents and women in general of the 19th century and on a deeper level will ask some very human questions about morality.

Please vote for this review on Ciao, Dooyoo and Helium. Thank you.