We're All Superstitious! A review of "Supersense" 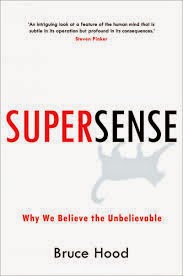 It seems crazy to think that our very irrationality might be part of what binds our species together and allows a lot of interdependence. Cognitive psychology is a fascinating subject and I have read many good books that explore the irrational response in human beings. The best sceptics, those who usually have a professional understanding of psychology, tend to be a lot more forgiving about those who believe. This seems to come from a strong sense of self-awareness. As logical and rational as we like to think of ourselves, we hard-wired to think irrationally.

Bruce Hood begins his excellent investigation into human behaviour and its leaning towards superstitious ideas by giving a simple test. He asks the reader, as he would ask any of those who attend his lectures, whether they would wear a clean second-hand sweater. Most people would agree to do this without having any qualms. He then says that the garment used to belong to the serial killer and rapist, Fred West. The response is dramatic. Even though it is an irrational response, the average person will not wear the sweater. Somehow, beneath their reasoning, logic and rationality, there is the ingrained belief that the item has the essence of evil.
Such an essence-based irrational idea is deeply rooted in our traditions. Hood argues that this is the reason why Irish Americans will pay a fortune to have soil from their homeland imported to the US, so they can be buried with it surrounding their carcass. This is despite them being in full knowledge that the soil will have to be filtered and go through a process that will pretty much rob it of its original form when it was first dug up from Ireland. Being interested in folklore and the Gothic I was intrigued by Hood’s immediate association with vampires and the belief that they had to occupy coffins filled with the earth of their homeland. This folklore is a feature of Bram Stoker’s “Dracula”.

Superstition is often mistakenly thought to be purely an error in our conscious thought. Hood cites B.F. Skinner’s famous experiment with pigeons as proof that superstitious belief goes back to a far more primitive part of our brain. For those who are unaware of the experiment, a group of pigeons were randomly fed in a box and after a while 75 per cent of the birds started exhibiting odd physical behaviours. Skinner concluded that they had adopted these behaviours by associating performance of the action with getting food.  This is compared to the way gamblers and sports-people perform certain rituals or wear certain items in the belief that it wards off bad luck. It is not difficult to see the association between these rituals and those that have gone on to form the trappings and physical representation of religions.

Although Skinner and those before him are given due credit, Hood is keen to explain how later experiments and research went on to supersede his hugely influential theories on behaviourism. The best example of this being Noam Chomsky, who’s critique of Skinner’s “Verbal Behaviour” book. Chomsky, of course, was pretty much the godfather of what now call cognitive psychology.  In this respect, Hood’s provides us not only with informative insights into superstitious thinking, but also a history of the progression psychology education. At a glance, one might think that the two are not immediately related. However, this is not the case. We intuitively think of the brain and the mind as two separate things. Hood puts it that we define our individuality through our conscious thought. This, in itself, is an irrational belief and brings us back to Hood’s core argument regarding our perception of essence. Our conscious thought processes are all the result of brain activity stemming from the oldest parts of this organ.

Hood’s book is an easy to read guide to our understanding of irrational belief. It is funny and self-aware, as well as a great source for referencing information on cognitive psychology. Here and there the text was guilty of taking unfounded subjective assumptions. It struck me by the fact that even psychologists let the self-awareness discipline slip. However, such things just seemed to reinforce Hood’s overall points. He was certainly not preachy or condescending about beliefs, but accepting that we are all susceptible to them.