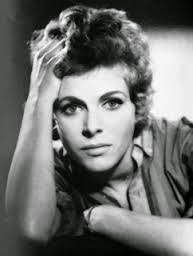 As is the fashion of most great British actors, Billie Whitelaw played down her career and her art. She called it a "flibbertigibbety occupation" and, again like so many performers, she lacked confidence throughout her life. She had a stutter as a child and suffered from stage fright. This didn't stop her from becoming one the best possible examples of her profession I have ever seen. She ticks all the boxes one could possibly imagine when it came to the pure art and craft (I consider it transcend both) of acting.

The legendary playwright Samuel Beckett viewed her with such admiration that he wrote roles specifically for her and called her "The Perfect Actress". She certainly suffered for her art in this context. Beckett had her perform a variety of roles where she was severely constrained or required a lot of athletic ability to carry through. In "Happy Days" she played the role of Winnie, where she spends the duration of the two-act play buried up to her "big bosom" in sand. In "Not I" her mouth was the only part of her body on display throughout the whole play. Whitelaw was tested to her physical limits throughout her entire professional relationship with Beckett, which lasted for 26 years and ended with his death.

Billie Whitelaw was one of those actors that just ended appearing in films I have come consider classics. The best film adaptation of Burke and Hare was "The Flesh and the Fiends" and Whitelaw's performance as an ill-fated prostitute stands out alongside Donald Pleasance's eerie William Hare and Peter Cushing's ambiguous Dr Knox. Her role, Mary Patterson, was a real victim of the two multiple murderers, but little is known about her tragic life. Whitelaw provides us with a tragic character who wrestles with the demons of her environment. When a naive and struggling medical student falls for her, she tries to step into his middle class, but immediately feels out of her depth. Through a sense of hurt she returns to her wretched life of drinking and abuse by men, scorning the man who loves her only to end up as a victim of William Hare. Using a strong and convincing Edinburgh accent, and moving changes through wishful thinking to bitter self-destruction, Billie Whitelaw's performance is very believable. Her character is very similar to a role Dylan Thomas wrote in his version of the Burke and Hare story, "The Doctor and the Devils", and I have wondered why few people have made connections between Thomas's play and Gilling and Griffiths's screenplay.

Despite her excellent and very sympathetic performance in this 1960 horror film, it wouldn't be until the 1970s that she would win international acclaim. It was in another horror, "The Omen", where she played the evil Mrs Baylock, the nanny of the Antichrist, Damien Thorn. Her next most memorable role was as the matriarch of the Kray family, Violet, mother to the notorious East End gangsters Ronnie and Reggie Kray. The film was an even more melodramatic and less historically accurate portrayal of crime than "The Flesh and the Fiends" (which is arguably the closest to the facts any Burke and Hare movie has got), but it had some excellent performances. With an East End accent perfectly in place (Whitelaw originally came from Coventry), Violet Kray is at the heart of the whole film. Her dialogue opens and closes the picture, providing a sinister edge to otherwise very loving words. It gives the film its heart.

She also appeared in the film adaptation of Doug Wright's play, "Quills", which ranks as one of my favourite movies. It's a fictional imagining of the Marquis de Sade's last days in the Charenton Asylum, where Billie Whitelaw plays a blind laundry woman. She is the mother of a maid who has caught the eye of both Sade and the head of the asylum. Although only a supporting role, Whitlelaw plays the role with relish, reflecting the responses the public had to Sade's work.

Billie Whitelaw worked in over 50 movies, but ceased working on stage following Beckett's death. There are few people in her profession that have the sheer range she offered and exhibited.