Fond Farewell to the Freaks 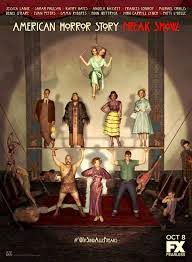 I came into the "American Horror Story" series late with season 4. For those who do not know, the series was created by Ryan Murphy and Brad Falchuk. Each season is a self-contained mini-series of 13 episodes. Just when I had written off the horror genre with only a handful or so films made since 2000 that could be considered classics, this type of work shines through. However, I wonder if this has little to do with horror and more to do with the fact that television is finally surpassing the feature film experience in terms of overall quality. "Freak Show" is an unashamed love letter to Tod Browning's "Freaks" and Herk Harvey's "Carnival of Souls." However, there is more to it than a simple homage. From the wonderfully eerie stop motion opening credits that fuse a twisted view of a child's clockwork world with inspiration drawn from physical anomalies through to its surprisingly heart-warming finale, "Freak Show" gives the impression that it will make no compromises. This is probably a very naive thing for me to say, but I see a production that indulges with genuine affection for its audience. It seems not to fear being surreal, humorous at the same time as being soap operatic with its plot. Sometimes the story stays within the boundaries of realistic horror and at other times, we get supernatural curses and conjoined twins using telepathy. Likewise, the gory special effects shift between painfully realistic depictions of violence to Kill Bill splatterphunk. The horror is post-torture porn in that it steers away from leering extended depictions of horror, only to shock you later. This same technique is used for the deaths of certain cast members, which it does well to generate sympathy for, narrowly have them escape a grisly fate only to do later anyway without losing the shock value.


Stephen King once wrote that the best horror was that which could seamlessly stitch a realistic world with the uncanny. "Freak Show" doesn't quite take this tactic. What it does is create characters that you believe in more than their incredible world. Making it a period piece in the 1950s was a great move. This was the beginning of a transitional time for travelling shows. My family had their most successful years during the 1950s, only really starting to feel the impact of television in the following decade. '50s USA is also perfect for showing the bright, sunny and picture perfect view often presented at this time. The cinematography with its depictions of sunshine and a bright colour palette, made sure we had the backdrop of the '50s that was romanticised in films like "Grease" and "Back to the Future", and the sit-com, "Happy Days". In this respect it echoes the black comedy horror, "Parents", which used the suburban US dream view to contrast with the darkness underneath.

The repertory cast, which features the great Cathy Bates, Jessica Lange and Angella Bassett, are given well-rounded roles and complex relationships. There is a wonderful intermingling of established actors with performance artists.  I was also delighted to see Matt Fraser as part of the supporting cast. I was first impressed by Fraser's work when I saw his "Born Freak" documentary and later "Unarmed and Dangerous". The martial arts connection clearly attracted me to his work, but it was also refreshing to see him to be amongst the first of a post-PC generation that questioned the middle-class freak show abuse lie that had been in place in the UK for a good part of a century. The actual freak show in the story is one of the last of its kind, despised by the changing world around them that presents its own superficial views on perfection. It highlights discrimination in an uncommon way, although it doesn't show the patronizing middle-class attitude that ultimately has seen so many disabled people losing work since the days of Joseph Merrick.

"Freakshow" has been timely in its release. At same time we have seen the release of documentary TV  series called "The Freak Show" (and referred to by TV presenters as "The Real Freak Show" to differentiate from the "American Horror Story"). Here the real impresario makes the point of reclaiming the "freak" title, employing people born with abnormalities to exploit the curiosity that their appearance cannot fail to draw alongside fakir tricks and feats of skill, such as sword-swallowing. It's quite refreshing to see such unabashed and genuine empowerment happening in a profession that was persecuted under the false premise that certain puritans felt sympathy for the employees. It is about time given the real exploitative television out there. From talent shows to medical documentaries to shows like "The Undateables", TV producers are exploiting people using short-term fame as a currency.

I leave you with another wonderful quirk of this show, the anachronistic covers of great songs performed by different cast members. This worked in several ways for me. Firstly, there is the utter indulgence of almost turning the show into a semi-musical, breaking tone, so as to further unnerve the viewer. Secondly, the demonstration of the sheer performance ability of the actors reminds me of the way of travelling show people, who would have to be multi-skilled if they were to stay in work. Thirdly, the joyful anachronism of the songs that work as a reflection on the storyline and its themes. They are all well chosen. A particular favourite of mine was the cover of Nirvana's "Come As You Are" by Evan Peters who played Jimmy "Lobster Boy" Darling. The song was something of anthem to my generation, the last of the Generation Xers. Having it sung in the 1950s by a disgruntled and troubled youth was pretty spooky for me to, given that I saw 1955's "Rebel Without a Cause" around the same time I got into the "Nevermind" album. The tragic end sequence of that film has always been associated with that song in my head. Jessica Lange's finale episode song with David Bowie's "Heroes" set the tone in a style that bordered on artistic genius.