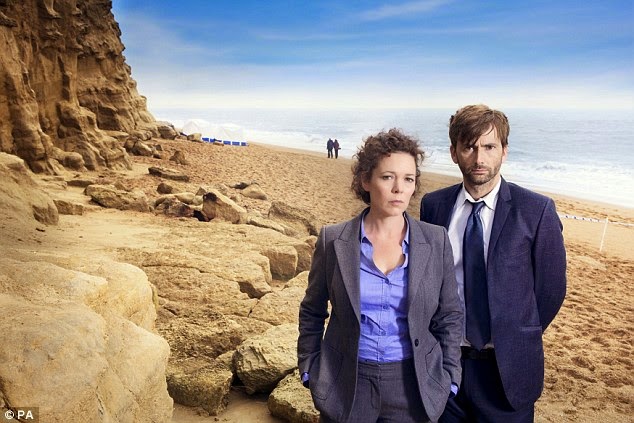 Whilst season 2 of “Broadchurch” is still up for the people’s jury to decide upon its critical merit, I thought I would cast a thought back to the original show. It began as a story where the body of a young boy was found on the beach of the fictional Dorset coastal town, Broadchurch. DS Ellie Miller (Oliver Coleman) returns from holiday to discover that her application for a promotion to the rank of Detective Investigator has been blocked by the employment of DI Alec Hardy (David Tennant). The young boy is the best friend of Miller’s son, creating an even great strain on the whole investigation. As frustration mounts to discover the identity of the child’s killer, the secret backgrounds of various characters are revealed.


You don’t need to scratch too far below the surface of the first season of “Broadchurch” to find the quintessential British murder mystery. The location and framing of the series, which is representative in its title, is reminiscent of the Agatha Christie’s Miss Marple mysteries. The use of small isolated communities as a place to stage a sensationalist crime can be very effective. They act as an effective alternative to big city crime stories that have been popular since the beginning of the crime fiction genre. We now also have global crime dramas with the likes of "The Blacklist". "Fortitude" is a series has been called "Broadchurch on Ice", but it distinctively more violent and even darker in style. At the other end of the scale “Midsomer Murders” have taken such an approach to the point of parody.

The main detectives also exhibit traits that we have come to accept make up fictional British detective stereotypes. DI Hardy is idiosyncratic to the point of being almost autistic in his attitude. However, the narrative conveys these flaws to the point that we can very well believe he actually is a failed detective. Like so many before him, he is also hindered by a physical affliction, but the seriousness of it makes it more a plot point than a gimmick. DS Ellie Miller is no sidekick despite the viewer making this assumption early on. She is as complex and instrumental as Hardy, and is deeply interwoven into the fabric of the Broadchurch setting. The setting is critical to how the show works and its inhabitants are a cast of characters that cannot be detached from the two main leads. An emphasis on character development, their responses to the tragedy and the key role each character plays in the whole story led writer, Chris Chibnail, to break from conventional narrative.

I couldn’t help but see David Lynch’s “Twin Peaks” both in style and content. The most obvious and rather crassly executed comparison can be found in the dream sequences. Serving neither as surrealistic idiosyncrasy or a useful key to a character’s psyche, the dreams are rather superfluous to requirements and thankfully do not riddle the show once the drama gets moving. However, the humming and repetitive synchronizer tunes by Ólafur Arnalds, who greatly inspired Chibnail when he first sat down to write the show are very effective. Arnalds’ music runs through the series with only a few distinctive variations in tune, helping to create a type of mugginess to convey the private hells being experienced by the various characters in the cast.

We are in a time now where violent action scenes are the norm in TV crime dramas. Shows like “The Blacklist”, “True Detectives” and “The Gathering”, although slickly handled in their own distinctive ways, think little of totting up the kill-rate. Characters are slaughtered flippantly in choreographed style. In a refreshing contrast, “Broadchurch” is triumph in minimalism. It focuses entirely upon one tragedy. Although others murders are referenced from a previous case and one death will be the result of the social impact of the initial murder, the focus of the battle is very much an internal one. Similarly there is a feeling reality pervading the narrative, which continues into the second season. The police officers are not shown to be superheroes with elite combat skills but regular human beings. When the action does occur, it is the frenzied, chaotic and clumsy nature that is most common in real life, where the person who initiates is usually successful.

The show has two dual aspects of interest. Firstly, there is the defining murder mystery element. Enhanced by the secrecy surrounding the production, even to the cast and crew, “Broadchurch” keeps most of its viewers guessing until the final episode. However, it doesn’t run out of steam with the big reveal and the momentum of the various characters carries us all into a dramatic aftermath. The aftermath is all part of the second appealing aspect of the show and what sets it apart as a thoroughly original piece of art entertainment. The depth of the various characters that provide credible but surprising twists and turns reveals both the complexities of human relationships and the ill-fitting simplistic responses society offers. The show shines a light on the role of the church and the media in a small community, and what part they play in an ensuing investigation. It doesn’t provide a straightforward opinion on either, although it makes clear contrasts between a small and isolated town like Broadchurch and the world at large. The show is loyal to its characters and they are not mere tools used to convey an idea. Loose ends are left on purpose in the narrative for the next season, but you also get the feeling that they are as part of the artistic process.

Don’t get me wrong, Chibnail is clearly no self-indulgent auteur. The show is crafted in line with the demands of a commercial TV channel, providing dramatic moments prior to each commercial break and always leaving a cliff-hanger. However, the work he puts into the very well casted characters charms the viewer to freely suspend disbelief. I can even forgive him for the superfluous dream sequences. Personal reflections work well, but we don’t need to see M.R. James-esque beach sequences. We see enough the beach in the main real action. What I particularly enjoy about this take on the murder mystery is the way tactics like red herrings are not just dropped. Even when we suspect their real nature, they are allowed to gently drift off to sea to the extent that they leave the viewer with still some doubt. It’s a technique that proves be effective in the next season when they reappear on the horizon during the court case. In this sense Chibnail might be responsible for introducing an entertaining variant on the red herring device, which aligns itself well with the uncertainty we face in daily life.