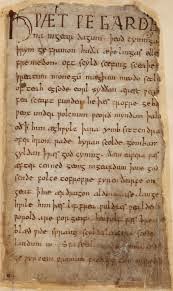 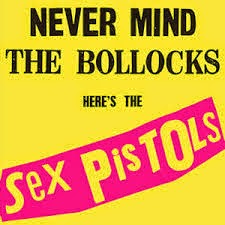 Beowulf is the best known example of Old English literature. We are told that, much like the works of Shakespeare, the piece stood out against other works of the same era because the creativity in its language. Linguistics and language in general are not my strong points, so I won’t attempt a pretentious analysis, but an excellent edition of the Radio 4 programme “In Our Time” explained that there were numerous phrases and words that were unique to the poem. Suffice to say that I will take the learned expert’s word for this fact for the time being. It made me think about the power of words. (listen to the radio show/podcast here)

I heard the programme not long after reading an interview with John Lydon, which corresponded with the release of his second autobiographical work, “Anger is An Energy”. One of his answers resonated with me when I heard about Beowulf’s linguistic peculiarities. When asked what single law would like to see passed, the man who declared the chaotic virtue of anarchy to a shocked public replied that he would like to see no word banned. He added that he didn’t recognize the existence of swear words. Although some readers might have expected Lydon’s Law to be something more in tune with radical politics, I wasn’t surprised by his answer. Unlike many punk bands of his own era and the various successive generations, the Sex Pistols were never a political band. Malcolm McLaren always tried to sell the idea that he created Punk Rock and it was all crafted as an art project levelled at the music industry, proving money could be swindled out of the labels by cynical manipulation. Part of that project was aimed to shock and one of the key features of the Sex Pistols notoriety at the time was the band members' willingness to swear gratuitously when being interviewed. The band's first record bore the title "Never Mind the Bollocks, Here's the Sex Pistols". The word "Bollocks" was challenged as a lewd word and many of the stories that stocked the album blotted out that portion of the title.

However, when policewoman Julie Dawn Storey arrested shop manager Christopher Seale for contravening the 1899 Indecent Advertising Act and the case was also brought against the Virgin record boss, Richard Branson, a rather different state of affairs unravelled. By defending the word "bollock" in public, the witness Professor James Kingsley, a former Anglican priest, scored a point for the correct use of Anglo Saxon English. The word was well over 1,000 years old and had been used in medieval translations of the Bible. It had come to mean testicle, but this was a later derivative after it had come to refer to rounded objects or actual balls and even as a nickname for clergymen from whence it became a slang term for meaning nonsense. The magistrate dismissed all four charges brought somewhat begrudgingly (see the case here). What the whole case might highlight is a common theme I have seen amongst quasi-traditionalists. Often those who preach a puritanical do so with a very warped and edited version of tradition. The more I look at history, the more I see how much we have to blame Victorian ideas. From the establishment of fad diets, commercialised quack medicine, parlour tricks turned spiritual chicanery to sexual repression and group denial.

Billy Connolly laid out a good case for swearing. A regular part of his 1980s stand-up set was his rant against anti-swearers. He was right that there is no English equivalent to telling someone to "fuck off". He is right, "Go away!" does not have the same strength. It does create its own atmosphere, which is why "you never read 'fuck off, he hinted'".

Back to language in general and it is pertinent that Melvyn Bragg should rate Shakespeare's First Folio over the eleven other books he chose for his "12 Books that Changed the World". This was the only work of fiction Bragg included and it comes down to the language content. Shakespeare brought the English back into respectibility, giving it richness and depth. He introduced new words, phrases and expressions that have gone on to form much of the modern language.

Given the power and influence of language, it is small wonder why so many writers have explored it and some of our most celebrated works are love stories to language. Richard Adams gave his rabbits in "Watership Down" not only a religion, but also the lapine language and regular terms are dropped in the conversations throughout the story. J.R.R. Tolkien was particular fan of the older languages of Britain and he used them to base the languages of Middle Earth. Orwell acknowledges the same problem brought forward by the defence in the "Bollocks Case" that there is a real danger in the muting of a language. In "Nineteen Eighty-Four" control is exerted through the disintegration of language, making it harder for people to communicate acts of rebellion or anything that went against the Big Brother or The Party. 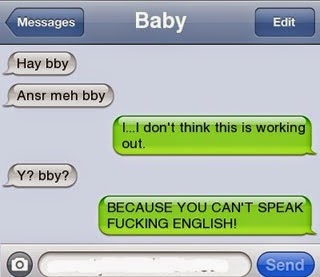 Annoyed with a world that seemed to be spewing out acronyms and text-speak, and somewhat inspired by Orwell, I mused over an idea to create novel that would slowly dissolve its language into a tiny and symbolic shorthand. I wondered how far it could go before the words disappeared or it was no long intelligible. Then I was reminded that the like of Byron used a lot of abbreviations in their correspondence, so I thought I would stop being angry. Text-speak appears to be waning now thanks to the way phones have evolved. 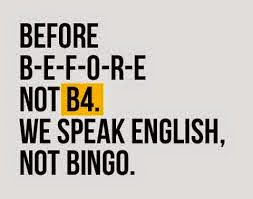 However, the over-use and the misuse of language remains a hot topic for many people. Cliches almost have a languge of their own. As the internet permits more of us to feel self-rightous in our respective bubbles, so our communication seems to lack empathy. Rhetoric is one thing, but bundling up a load of trite verbiage to win someone over is something else. I have seen the proverbial olive branch extended in the form a personal message - either via social media or mobile phone text message - containing nothing but a series of cliches. Reading through this insincere display of reconcillation, one cannot help but compare the experience to the way a business is trying to win back a client. There is a chasm of difference between quoting a great work of literature in context in order to convey one's feelings and simply stringing together trite expressions. It comes over as someone going through the motions with little actual feeling for the recipient of the letter.

I have seen similar examples during debates, where the person making what they feel to be an empassioned speech to argue their point end up bombarding their audience with corporate-speak bullshit. Once again, the misuse of language here results in the speaker coming over as insincere. Cliches take the charm and power out of rhetoric.

I have no issue with slang and I believe it has its own poetry. However, my age shows in my dislike of words like "awesome", "random" and "sick". The universe is awesome. The Seven Wonders of the World are awesome. The breadth of the genius of Galileo, Einstein, Shakespeare and Edison is awesome. Someone willing to cover for you in a shop while you take a wee is not awe-inspiring. I appreciate the slang usage might allow for awesome meaning "very impressive", but to stretch the expression to cover for one's reaction to finding the final malteezer in the corner of a bag seems to be somewhat overblown. This quote put forward in this excellent article from "The Writer's Circle" nails the point:

“As humans, we waste the shit out of our words. It’s sad. We use words like 'awesome' and 'wonderful' like they’re candy. It was awesome? Really? It inspired awe? It was wonderful? Are you serious? It was full of wonder? You use the word 'amazing' to describe a goddamn sandwich at Wendy’s. What’s going to happen on your wedding day, or when your first child is born? How will you describe it? You already wasted 'amazing' on a fucking sandwich.”


Regardless of my rant about the misuse and over-use of words and phrases, I appreciate language is dynamic. People like Geoffrey Chaucer and William Shakespeare are praised for the way they altered our language. Why are they so different to someone like Kanye West who is successful in his profession and also coining invented words and creating memes? The answer is they learnt the rules before they broke them. West promotes anti-intellectualism and has gone on record for saying he is proud that he doesn't read books. He finds them pretentious and self-indulgent. Considering the egoism that is inherient in his particular art-form, I cannot help but be deafened by the hypocrisy in that massive generalization of such a huge medium. Books are important. The practice of reading can be a non-passive discipline. Rather than just intaking sounds and images, you have to engage your brain and the time that takes leads you to better process the information.

We should celebrate language. We should do it by not being afraid to use new words we have heard and to use words that accurately describe what we are trying to say. Swearing and slang have a place and should be part of the rich culture of language. However, all of this should be done with thought. Language emerged from our species's unique brain function. It is a crime not to use that function to its full extent.