Digging This One Up in Time 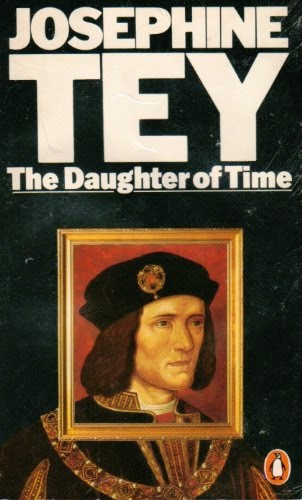 Please excuse the terrible punning in the title, but it was all that sprung to mind. The "re-discovery" of Josephine Tey's book in recent times has been met with mixed feelings on my behalf. I say mixed because although the work is very original and interesting, it seemed to disappear for a while. Now, with the huge resurgence of interest in Richard III due to the exhumation of his body under a Leicester carpark and his reburial at Leicester Cathedral with all the pomp he wasn't granted 500 years ago, Tey's book is now popular once again. It's a case of geeky "So now you want to read the book" from me. It defies the conventional and cynical belief that historical retrospective detective novels need to be balanced with physical adventure, best exemplified by the truly awful "Da Vinci Code". However, at the risk of spoiling the novel's conclusion I am not in favour of its conclusion and firmly in the corner of historian, Alison Weir (not to mention Winston Churchill and my old English teacher!) I recommend Weir's excellent primary source examination of the case of the murder of the children, Edward V and Richard Duke of York, which I bought as "The Princes in the Tower" and has since been republished as "Richard III and the Princes in the Tower". Nevertheless, it still stands as a great work of fiction and an exercise in historical research albeit with a faulty premise and foregone conclusion derived from the hero's first impressions taken from a portrait.

I first read the book in a situation that wasn't far off that of the story's hero, although I flatter myself that my backstory was a little more. I was in the midst of studying my A Level in English Literature and part of my homework was to read "The Daughter of Time". Whilst helping on my parents' private zoo, I was bitten on the hand by a hyena. During the week I spent in hospital, where I underwent two operations, I used the opportunity to read Josephine Tey's book. "Richard III" was our set text and my teacher was an ardent believer in exposing his students to as much surrounding material as possible. We not only saw all of the History Cycle of Shakespeare's plays from "Richard II" up until "Richard III", but studied the Wars of the Roses from a strictly historic point of view and the style of tragedy play that influenced Shakespeare when he wrote "Richard III".

The story begins with Inspector Alan Grant (not to be confused with the excellent real-life comic-book writer) laid up in a hospital bed with a broken leg. His over-active intellect desperately tries to stave off boredom by tracing the geometry of the hospital ceiling. His friend, the actress, Marta Hallard, encourages him to investigate historical mysteries and brings in some portraits of historical figures. Tey's character, much like Sir Arthur Conan Doyle's Sherlock Holmes, relies on the pseudoscience of physiognomy to determine an individual's character. Despite only being given a painted representation of a person, Grant makes a decision regarding Richard III's character and then sets out to investigate his involvement in the murder of his brother Edward's two children. What follows is an exercise in sifting through history and testing out theories. He is aided primarily by historical researcher, Brent Carridine, but has little trouble discussing the case with his attendees at the hospital, where he tests his various theories.

Despite disagreeing with Tey's conclusion and Grant's confirmation biased approach to the investigation, I admire the idea that the author is trying to propagate. Tey was credited with her no-nonsense approach and her dislike of fakes. To this end, the book's over-riding theme demonstrates how bad history is constructed. She has Grant systematically plough through depictions of Richard III, including children's books, novels and scholarly works. The names of much of the material are false, but offer strong nods to the content of real works. She also cites examples of events in history that were falsified on purpose for political ends, particularly the story of the TonyPandy Riots of 1910. I agree that if a myth is repeated enough, it becomes fact and we should approach it all with a critical mind. Revisionist history, which is what is presented in "The Daughter of Time", has a bad reputation.  Nevertheless, we know that all sorts of pseudohistory - from hyperdiffusionism to conspiracy theories - are present in our time. We know how effective propaganda can be to the extent that myths have been created with no solid evidence ever being put forward and even some myths being debunked around the time of their first propagation. Nevertheless, due to various factors, including the love of a good story, has led to some untrue ideas even being taught in history lessons. Hitherto pop history wrongfully asserts that most Roman gladiator bouts were death matches, that "Bloody Countess" Erzabet Bathory bathed in the blood of virgins, William Wallace fought in a kilt, Napoleon Bonaparte was short and Henry V was a saintly, reformed hero, beloved by his men.

The novel rightly stands amongst any respectable list of top 100 or even top 10 mystery novels written. I can understand why The Crime Writers Association would vote it to be the Best Crime Novel of All Time, even if I my enthusiasm for this great work won't extend that far! Like the great Agatha Christie Elizabeth Macintosh, writing under her regular pseudonym of Josesphine Tey, wrote a landmark novel in the genre that has been copied by later great novelists. Today, I don't see it so much as a great example of history, but it easily superior the pseudohistory presented as fact the works of Dan Brown and his imitators. The great virtue of "The Daughter of Time" is that it champions intellecutual adventure for a lay audience. In this respect, it makes no compromises. That might be a surprising comment to make, as the work is clearly part of the Alan Grant franchise. Colin Dexter would use the same idea (and take a similar risk that paid dividends) with his detective hero, Inspector Morse, in "The Wench is Dead". Like Grant, Morse is laid up in bed and embarks upon an historical murder case that he believes resulted in blame being wrongfully placed. Given the academic nature of the material, it would have been easy for Tey not to have made this an Alan Grant adventure but a weightier piece of experimental fiction. The setting and style of the story is very far removed from any other story in the franchise and could easily have upset fans. Tey might have either been tempted to write something more convoluted, such as Peter Ackroyd's "Hawksmoor", or even self-indulgent. Furthermore, she just might have resisted her artistic urge and written a more conventional mystery adventure for Alan Grant. Instead, she gave her hero the greatest adventure in the series. The work remains a great tribute to Tey, who died a year after its publication.