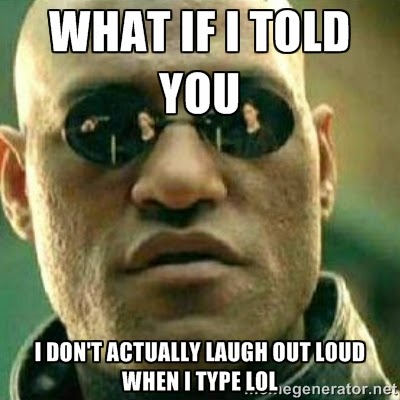 Whenever a new James Bond film is announced or advertised I tend to fall back on old jokes. The jokes are often aged by me because I repeat them a lot. It's a sign of approaching old age annoyance on my behalf. I make no excuse for the deliberate piece of self-indulgence any more than David Lynch did for making "Firewalk with Me". I have some sympathy for Edmund Blackadder of "Blackadder the Third" when he outlined his desires for life:

I know how to ruin a joke as good as anyone, but there are definite limits to my evil. I recall once being told by a member of the Millennial Generation that it was important for me to write "lol" or put in smiling or winking face formed out of punctuation marks when I make a controversial statement in case I upset the reader unless I meant to cause offense. When I looked puzzled as to why someone might get the wrong impression from a flippant, facetious or playful remark, the annoyed member of the Millenial Generation told me, as if my social education had stopped in the sand-pit, that "people cannot read sarcasm!" Maybe this is the reason why there are wars. If only our great writers, playwrights, orators and cartoonists had known to place a "lol" or a smiley at the end of one their humourous sentences we could have avoided a lot of bloodshed. 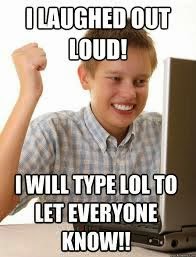 Just to digress a moment, I have and do use "lol" a bit. I don't do it a lot, but I sometimes feel the need to do it for the reasons outlined by my rather annoyed younger friend. I sometimes need to do it in the same way that I might need to speak French to a French-speaking person. That is if I spoke French (which I didn't for the five years I took it at school). For the record, that's me being understanding towards people who use a different textual dialect to me rather than me conceding to cultural change. I can give live with "lol" if it is not excessively used. Lol is okay. However, I don't go with all the other descriptions of actions the person typing a message is apparently carrying out. It seems we are now using stage directions to illustrate our conversations for some reason and it has become socially acceptable. Wtf is okay, only because I find it disproportionately funny that is the same acronym as the World Taekwondo Federation and someone made a funny quip about that on an internet forum about a decade ago. Omg works on an ironic level for me and that will bring us to the nub of my rant. However, that is not before I have something to say about smilies. 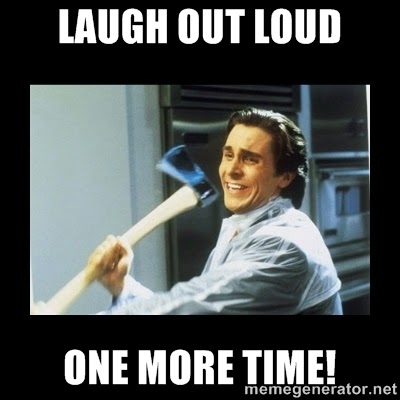 I probably use the smilies more. In fact, I know I did and still do. For fear of upsetting those sensitive souls out there I have taken to using so many winking smilies that my textual dialogue is now delivered as if the person saying it has a nervous tick. For the record, I don't use the term "emoticon". Emoticon sounds like a Transformers villain that didn't make the grade. Maybe he was Starscream's counsellor and used to transform into a tub of Ritalin. Now there's a new science fiction opportunity for Tom Cruise!

Anyway, back to the point about irony. Going by what my well-meaning Millenial sociology expert had to tell me, we seem to have spawned an odd cultural mutation that doesn't get the use of irony. To them Bob Newhart's sketch about Abraham Lincoln, where Madison Avenue signs off by suggesting that the president might want to take in a play should be punctuated with a lol. Under their watch I foresee all school editions of J.B. Priestly's play, "An Inspector Calls", having a fleet of Emoticons deployed on Mr Birling's speech, set in 1912, where he declares the unsinkability of the Titanic and the unliklihood of an upcoming war.


Worse than not understanding irony, dramatic or otherwise, is the lack of subtlety. Even a crass joke can be ruined by someone who doesn't find it crass enough. These people exist and they are multiplying I tell you. It brings me back to my shameless, bad and plagerized James Bond joke:

"I hear that the new Bond film is called SPECTRE. I hear they are rebooting the Blofeld and Oddjob characters and combining them to create a new villain... Oddfeld."

When someone then interjects with "No, no. He would probably be called 'Blo-Job' and look around for a high-five it is okay to cry a bit for humanity. There's a special place in Hell for such people...