Many a Prophetic Word Spoken in Jest 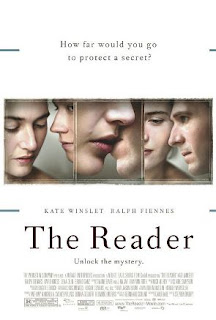 Plot:
Michael Berg (Ralph Fiennes) is a dethatched man. Divorced but the father of a daughter he doesn't see enough of, he reflects upon his past. At 15 years old (David Kross) he was struck down by scarlet fever, but rescued by a 36 year old tram conductor called Hanna (Kate Winslet). After a lengthy recovery period he tracks down his rescuer and they begin a secret affair. Hanna is a very mysterious woman who, seeing that Michael is studying classic literature, asks that he read to her before they have sex. Despite Hanna's cold manner and Michael's childlike inexperience, the relationship begins to further develop. Then one day, upon hearing she is to be promoted, Hanna abruptly leaves her apartment without saying a word to Michael. Years later as an undergraduate and whilst attending a trial as part of a special seminar held by a concentration camp survivor, Michael attends a trial for Auschwitz guards who presided over several atrocities at the camp. One particular atrocity involved the deaths of 300 prisoners who were locked into a burning church by the guards. One guard is singled out as the ringleader of this particular crime. Michael is shocked to see that this guard is none other than his mysterious Hanna...

Review:
If you told me that "The Reader" swept the 2009 Oscars I wouldn't have been surprised. It didn't despite being nominated in some of the top categories. In the end only Kate Winslet nabbed her long overdue gold, as she had done at all the other major festivals, but more on that later.
Back to the film proper and I have to say that not only does it seem to be the sort of feature destined to clean up at such shows, but it is actually very good. "The Reader" is based on a 1995 German novel by Bernhard Schlink and provides an interesting situation for filmmakers. It is an English speaking film made in collaboration with Germany and America distributed by the Weinstein Company. The result is an English speaking picture filmed in Germany, but given the exposure of offered by Hollywood. The film only received a limited release, but this type of picture was never destined to be an opponent for "The Day the Earth Stood Still", which was released on the same day. Its rivals were more obviously other thought-provoking dramas such as "Doubt", which came out a couple of days later. "The Curious Case of Benjamin Button" was also another obvious rival. It came out in the same month too. However, it is here where we can see the superiority of "The Reader" of this particular film. Although a good movie, Benjamin Button doesn't really prompt a tremendous amount of thought, at least not on subjects that really challenge the viewer. I would even go as far as saying that the make-up effects performed on Kate Winslet rival the visual effects in Benjamin Button, which nabbed its Oscar for this particular area.


The first half of "The Reader" comes across like a European film. In this sense it is very honourable to the structure and spirit of Schlink's book. However, it has been accused of eroticizing the serious issues it covers and even creating a type of perversion. What these critics are referring to, of course, is the fact that Kate Winslet spends a good part of this first half completely naked and fulfilling a 15 year old boy's fantasy. Shown as a touching intimate relationship, it is uncomfortable to acknowledge that this is actually a positive depiction of an ex-Auschwitz camp guard committing paedophilia. I don't think this shakes the film's moral core. The scenes may be sentimental, but they are far from pornographic in their execution and didn't strike me as disturbing.

Stephen Daldry's direction with these scenes - and indeed the rest of the film - should be acknowledged. Daldry, like Winslet, is another criminally overlooked talent. As those of you are familiar with my reviews might know, I have a soft spot for works based on plays or that have gone into inspire plays. It is then not surprising to me that Daldry's background is in theatre. A good theatre director, especially one that specializes in straight drama, has a special relationship with his actors and is usually perfect for character-driven works, which "The Reader" is. He keeps scenes moving at the right pace throughout the film and even in places that an inferior director might make ponderous, something that is easy to do with an adaptation of a novel that doesn't have a great deal of action throughout.

A far more direct criticism of both the book and film is that it sympathizes with the perpetrators of one of history's most diabolical evils and downplays the relevance of the holocaust. As with other films such as "Dead Man Walking" and "The Woodsman" this type of criticism really misses the point. Like these films, the horrors of Hanna's actions are never mitigated. She is not put across as a warm character, but rather a person with someone disturbing personality traits and a corrupt sense of values. What the film does that the others I have mentioned also do, is show humanity in all its guises. This includes being honest about human relationships. It refuses to acknowledge that everyone involved in atrocities are one dimensional monsters, a view that although might sit nicely with our clear cut morals but doesn't help explain anything. People who wish to see this sort of thing in history or even works of historical fiction retard our ability to understand. They remind me of those who justify the revision of history for "the good of the cause".
What will upset these critics even more is the sense of apathy that the film reflects on the holocaust as time moves on. Even the unforgiving daughter of a survivor admits that nothing of value came out of the camps. On that note I would say that the great Jewish philosopher, holocaust survivor and author of "Man's Search for Meaning", Viktor Frankl, would disagree. Nevertheless, the point is that this piece of terrible history that has dominated the German national psyche for the rest of the 20th century is becoming more and more detached from the living. "The Reader" explores this without casting judgment, but prompts thought and reflection.

Overall this we have the metaphor of reading and, more specifically, reading allowed. "Der Vorleser", the original name for Schlink's novel, actually implies "reading allowed" as opposed to just reading. Hanna's journey goes from being a detached illiterate person who only receives information to a person who can read and therefore immerse herself in the classics she enjoyed listening to. Likewise the horrors of the holocaust and the situations Germans found themselves in during the time that the Nazis were in power are juxtaposed with the feelings of those who weren't there.
Aside from Kate Winslet's performance as Hanna throughout the picture, including having to endure over seven hours of prosthetics to show her aging, the film also stars Ralph Fiennes playing the older Michael Berg and German actor David Kross as his younger counterpart. Fiennes is as reliable as ever putting in a reserved performance as the reflective Berg and Kross shows serious potential throughout his performance. Given the restrictions of the film being English-speaking yet based in Germany and on a German novel, it is always awkward to decide how to handle dialogue. Having all the actors speak in a German accent often only works in the tongue-in-cheek manner seen in "The Shadow of the Vampire", but here it almost feels like we are watching a German film that for some reason we can hear in English. It's quite a skill and interesting something that Schlink, the book's author, insisted upon, believing the issues deserved a wider audience.

Postscript:Incidentally being a big follower of Ricky Gervais's work I guess I couldn't leave this review without my comment on his comical prediction that came true. For those who are not aware of this prophetic example of this "many a true things spoken in jest" moment, I will explain and at the same time try to put down a rather disturbing racist conspiracy theory at the same time. In episode three of his series, "Extras", Kate Winslet, playing a self-parody, comes back with a cynical ulterior motive when she is commended on raising awareness of the holocaust:

"My god, I'm not really doing it for that. I don't think we really need another film about the Holocaust, do we? It's like, how many have there been? We get it! It was grim! Move on! No, I'm doing it because I've noticed that if you do a film about the Holocaust: guaranteed Oscar. I've been nominated for four. Never won! The whole world is going, 'Why hasn't Winslet won one?' That's it. That's why I'm doing it. Schindler's bloody List. The Pianist. Oscars coming out of their ass!""Kate Winslet's win this time around seemed to prove Gervais's point exactly and he ribbed her about it publically at the Golden Globes Awards, "I told you, do a Holocaust movie and the awards come, didn't I?" As is the nature of Gervais's humour, the point ridicules Hollywood sentimentality and intentionally shocks by using a taboo subject. Some have interpreted the original lines to be inferring to the great Jewish conspiracy that is supposedly behind everything, but this is highly unlikely. Gervais is known as a strong rational sceptic, which one would assume would deter him from anti-Semitic conspiracy theories, and besides given the criticism this film and the novel it was based on has incurred it is not the sort of holocaust film that would be approved of by the supposed "Elders of Zion".


I wrote this review back in February 2010. This was before Ricky Gervais's material went downhill with the "Ricky Gervais Show" podcast onwards and the guy proved to be a bit of hypocritical animal rightist.