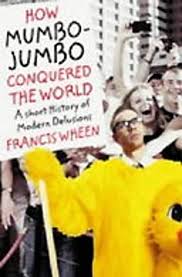 Four hundred years ago the world made a major step forward in its attitude towards information, learning and thinking. We call this period The Enlightenment. It would see the emergence of the Scientific Revolution. The United States of America would be founded on these principles and up until the mid-20th century that same country would reflect The Enlightenment’s values. Then something started to happen. Amidst the solid infrastructure in western society that was built by the forces of reason, lurked an unchecked virus. Irrational thinking was back and it had found its way into a whole range of areas in our society. Francis Wheen believes it first properly blossomed with the ascension of Margaret Thatcher and Ronald Regan’s politics in the west alongside the Ayatollah Khomeini’s rise to power in Iran. This is where his 2004 book, “How Mumbo Jumbo Conquered the World” begins.

Wheen, who was a good friend of the outspoken anti-irrational journalist Christopher Hitchens, does not take the usual route of most sceptical books. His politics may be very similar to Hitchens but he does well not to simply argue for the left. He delivers telling blows to both sides of the political spectrum with impunity. President Ronald Reagan’s regular astrological consultation and Prime Minister Margaret Thatcher’s Puritanical Christian outlook are given as much time in Wheen’s critique as President Bill Clinton’s heavy endorsement of self-help gurus and Prime Minister Tony Blair’s use of New Age treatments. All of these are strong examples of the worrying amount of mumbo jumbo influencing important decisions in top places for a long time. The author’s argument is simple: western culture has abandoned reason and bought a lot of snake oil.

The arguments for a retro-gradation are convincing. Back in the 1920s, arguments against evolution by natural selection were not high on the agenda of Europe or the USA. Wheen quotes the then US president ridiculing the very idea that anyone would argue a case for Creationism. Fast forward almost a century and Tony Blair is allowing certain schools to “teach the controversy”.
Think Ben Goldacre’s “Bad Science” levelled at society at large and you are somewhere close to Wheen’s approach. Written at a time when Tony Blair was prime minister and we were in the winter of New Labour’s many follies, at a time when spin doctoring had made most people giddy with cynicism, “How Mumbo Jumbo Conquered the World” exposes how many of those driving education and politics were in a personal war with reality.

This last point I think reveals the strongest emerging theme in his book, the philosophy of postmodernism. Postmodernism can provide us with a powerful portal and its influence can be useful for broadening an outlook. However, since World War II we have seen it taken to an extreme end for too long. The result is the ridiculous concept that all ideas and opinions have equal validity. By considering that reality is an illusion might be an interesting intellectual exercise, but it can be destructive premise allowing in lazy thinking and opportunistic zealots. This has provided a rich pseudointellectual breeding ground for conspiracy theory, ethnocentricity and extremist religious ideas. By devaluing so much, it has also allowed a state of apathy to come into play. When this has been addressed, people tend to snap back with thoughtless judgement calls using a very crude political compass.

Blind politics are a dangerous thing and possibly part of the postmodern by-product. I wince at the way individuals will swing left or right on an individual issue without really thinking about the argument. The irony is that swinging one way too far can mean you will meet the other side. Wheen is fast to point out how many in Socialist France supported the Conservative Islamic fundamentalist stance of the Ayatollah Khomeini against the Capitalist USA.

Wheen’s book is a tour de force of the way irrational thinking took hold of the 20th century. The writing style is accessible and frank. Wheen takes no prisoners and uses a range of different sources to back up his arguments. Although one might hastily categorize “How Mumbo Jumbo Conquered the World” alongside the works of Richard Dawkins, Michael Shermer, Sam Harris and, naturally, Christopher Hitchens, it isn’t an overt attack on religion. Wheen’s targets are the enemies of common sense intellectualism. His work, in terms of its era and content, sits more with Damien Thompson’s “Counterknowledge”, David Aaronovitch’s “Voodoo Histories” and Richard J. Evans’s “In Defence of History”. He references the last one in his main chapter on postmodernism. I would recommend the work for those willing to take a step back from western society and consider the roots of a lot silly decisions. If anything it offers a chance to take an introspective look on how we think and why we are thinking this way today.

I got my copy from a charity shop, so I can't fault the value, but the cover price for a paperback is certainly worth the investment. I have been using it as one of many resources for my upcoming book on martial arts scepticism, so I am definitely re-reading it and will be re-reading it some more. The information is accessible and it is very well researched. The writing style is not without humour. Jeremy Paxman found it "Hilarious!" apparently. There are slides here and there that reveal the author's socialist or liberal leanings, but I don't believe that undermines the general dispassionate approach the author takes with this work. It's a strong example of progressive and pro-rational 2005 journalism.