Continuiry Bond - A Review of "Spectre" 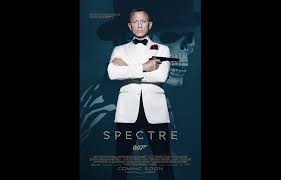 With this, Eon Films’ fourth instalment of their James Bond reboot starring Daniel Craig, there was clearly a strong intention to both pay homage to the previous franchise and to reward those who have stayed with the current one. Clearly the geek-factor that nearly all Hollywood franchises take seriously is at the very heart of “Spectre”, which is currently the most expensive movie in the history of Bond. How this geek-factor is dealt with in the made-by-committee blockbusters of today can determine the quality of the art being produced.

The iconic gun barrel sequence is back at the beginning, which was the case for every one of the 20 Eon-produced movies prior to the reboot. In “Casino Royale” a very different variation on this theme was provided, ending rather than starting the pre-credit sequence, where the viewer actually got to see Bond’s shooter. “Quantum of Solace” and “Skyfall” put the gun barrel sequence at the end. With the gun barrel sequence now back in place, “Spectre” makes the statement that all the previous films have been leading up to reestablishment of the familiar Bond institution.


“Spectre” opens on Mexico’s Festival of the Dead, which echoes both the grandiosity of the Rio’s Carnival festival in “Moonraker” and macabre flamboyancy of “Live and Let Die”. Fans and film pundits alike had already remarked that the festival skull mask, used as a misdirecting backdrop in the film’s promotional material, was channelling “Live and Let Die”. With correct rumours circulating that an old franchise villain was going to make his first appearance in the new canon, many would have been forgiven to think this was the iconic Baron Samedi. It turns out that we see the formation of an even more famous villain, whose position in both the novels and Eon films assures his place as Bond’s true arch-nemesis.


If all of this wasn’t enough “Spectre” features the fully established line-up of Bond’s support team fans have come to love of M, Q and Moneypenny. Even Felix Lester gets a namecheck, having been out of the action since first meeting Bond in “Casino Royale”. The film also features Q’s gadgets, including a fully loaded Aston Martin DB10 complete with a unique twist on the ejector seat, which was last seen in “Goldfinger”. There is also reference to the perpetually unlucky 009 who was last seen in 1983’s “Octopussy”. An appropriate octopus emblem used by the Spectre organisation might also be a nod towards this particular movie outing. Then there is Mr Hinx, played by mixed martial artist and pro-wrestler Dave Bautista, a super-powerful and persistent man mountain henchman assassin in the mould of Oddjob, Jaws and others. The extensive globe-trotting that was a heavy feature of most of the Bond franchise seems to have taken up a good portion of the budget again. This includes Bond’s first visit to Rome. Although filming did take place in the former seat of the great ancient empire, a key scene set in Rome actually took place in the courtyard of my local Blenheim Palace.

The movie’s opening credits are no less subtle than the film’s opening pre-credit sequence in the geek message they are putting over. However, this time the film offers heavy reassurance that fans of the new franchise have not been neglected. As Sam Smith’s melancholic Bond entry, “The Writing’s on the Wall” delivers two verses that indicate Bond will be facing shadows from the past the opening credit sequence provide us with an array of graphics that feature images from the previous four films. “The Writing’s on the Wall” is the first Bond theme to enter the charts at the number one position. Interestingly it didn’t stay there for long and was soon occupied by Adele’s latest single. Adele’s previous single had been for “Skyfall”, which was the most successful Bond theme up until Sam Smith’s song (yet definitely its artistic superior). “The Writing’s on the Wall” is fairly restricted in the overall score of the picture and rightly so. There is a fair argument that it brings home the tragedy in Bond’s life and the looming fears, but Sam Mendes does not hang about with the action and the song, including its instrumental, is best left behind once those credits stop rolling. After that there are clear strong samples of familiar Bond music, culminating in familiar big band James Bond theme tune being played out in full during the end credits. The film is making the statement that everything else has been a prelude to this picture.


However, this isn’t really the case. Despite what the real “Team Bond” of three writers, a director, two musicians, the marketing department and everyone at Eon Productions would like you to think, “Spectre” is not the culmination of a smoothly plotted story arc that began in 2006’s “Casino Royale”. Rather it is a slick exercise in continuity retconning, which long-time comic-book, long-running serial and soap opera fans will know all too well. Taking advantage of the end of the decades-long legal of war of attrition over the intellectual rights of the Spectre concept, the Quantum organisation that first appeared in “Quantum of Solace” has since been changed to be just one of the tentacles of the real threat behind the scenes. We’ve been here before with Star Wars, where it has been implied that the six-movie franchise were all part of George Lucas’s grand plan. The previous Eon canon cared little for continuity. The only thing indicating any form of chronology came in the references to Bond’s ill-fated marriage in “On Her Majesty’s Secret Service”. Bond films have always reflected the era they have played and have a strong reputation for getting it right or even being ahead of their time. In this respect, the new canon is a massive improvement on anything that has gone before.

Critical responses to “Spectre” have been mixed. Perhaps inspired by a sense of patriotism, pre-release UK critics were overwhelmingly positive about the picture. Now we find polarised responses from professional and amateur reviewers alike. Many of the positive critics enjoyed the way the film played to “audience expectations” and worked in so much of the Bond formula (my “geek-factor” if you will). Predictably the negative criticism felt that the picture was something of a mishmash of unoriginality in order to pander to the box office. Some were bored by the film falling back on the many established mainstays of the series.


Curiously the first critical praise I heard, declared the film to be a thoroughly action-packed spectacle whereas the negative responses I received from friends were that it was “too involved” and “long-winded”. Prior to the release close-to-home critics of an earlier generation moaned about the new canon’s lack of humour. They were probably representative of those who weren’t happy with the Roger Moore to Timothy Dalton transition, particularly those who weren’t impressed with 1989’s “Licence to Kill”.

I found “Spectre” to be an easy ride. The Eon Bond movie is always going to be a made-by-committee formulaic picture and they perfected this craft long before Hollywood lost its film-lovers in favour of media-moguls in the early ‘90s. Often a Bond film can tell us a lot about our movie-viewing habits and sometimes we don’t like what we see. “Licence to Kill” was ahead of its time in providing a Bond that was closer to Fleming’s original character and we saw this re-emerge in the new canon. I appreciate the desire for developing backstory and preserving continuity whilst delivering familiar instituted trademarks. The geek-factor might be cynical, but it isn’t patronising or entirely predictable.


Unlike previous Bond instalments, including “Quantum of Solace” the only direct Bond sequel to date, the film relies a lot on the viewer having seen and remembered the previous three movies to some degree. This makes a refreshing change and, in true Bond fashion, this reflects the influence of television as well as comic-book movie franchises. However, Mendes keeps events flowing at such a pace that no one could really accuse him of lingering on anything. Unfortunately this does come at the expense of regular deux ex machina occurring that makes Bond seem incredibly lucky. Seriously, this is not a guy who ever has to worry about getting an appropriate form of transportation out of anywhere or to any place. Maybe, it is a British wish fulfilment comment on public transport problems.

I cannot see that the “drawn out” argument can be fairly made, but I can see that some might be irritated by the regular plot reminders and others by the simple fact they cannot remember or have seen the previous three films. The writing team do a decent enough job of suspending disbelief and papering over glaring plot holes in their retconned story arc in a manner that would get the approval of most comic-book readers.


The strong cast do a solid job, although only Daniel Craig and current favourite baddy actor, Christopher Waltz, get a chance to really shine. Ralph Fiennes slips into the M role as if he was there since “Dr No”, although fans get treated to a Judy Dench cameo in a very contrived plot point. Naomie Harris’s Moneypenny is decisively more streetwise and long overdue. I have enjoyed Ben Whishaw’s work since “Perfume”, although I wasn’t overly keen on his voice acting in “Paddington”. His Q doesn’t attempt to resemble the weary and grouchy character created outside of Fleming’s material and most famously popularised by Desmond Llewelyn. Rather he happily plays within the cool nerdy sidekick mould you can find in any number of superhero or spy TV shows of today. Andrew Scott and Léa Seydoux are probably the only miscast roles in the film.

“Spectre” was never going to reach the level of integrity and class set by “Casino Royale”. It didn’t have the benefit of any unused primary source material offered by Ian Fleming and it was too long gone into the new franchise to start showing restraint. Nevertheless, it does a grand enough job playing the movie blockbuster game of its time.


You can't please everyone, Mr Bond, but this perhaps one the best examples of a film doing a decent enough job trying to do exactly that.