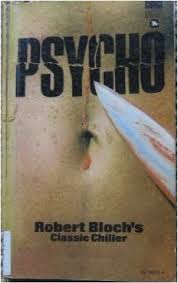 Just off a junction on a busy highway there still exists Bates Motel. This struggling business is run by Norman Bates who endures an oppressive relationship from his unhinged mother who seems hell-bent in keeping her son single and away from the outside world. Then, one night, Mary Crane arrives at the Motel. She is on the run with $40,000 she has stolen from of a client of her real estate company. Soon a private detective and her sister will be after her, but none of them expect the horrors that will ensue the night Mary accidentally turns off the highway and meets the Bates…


We have Peggy Robertson to thank for the franchise that this 1959 pulp fiction thriller spawned and keeps on giving to this day. Apparently Robertson had read a good review by Anthony Boucher of Robert Bloch’s seminal thriller, “Psycho”, despite Paramount Pictures already rejecting the story’s premise. Hitchcock, never one to back to down to anyone in movie world except maybe his wife, thought differently and fought a hard battle against virtually everyone to get the film greenlit. My copy of Bloch’s novel is a paperback published not long after the film was made, but looks fairly plain. In fact, the thin little novel was so indistinct amongst my book collection that I had a job to find it earlier this year.


Like “Jaws”, “Psycho” was a successful piece of pulp fiction that has been largely overshadowed by the blockbuster success of its cinematic adaptation and subsequent legacy that remains popular today. It also shares a few other traits with “Jaws”. Both films hold the standards in suspense for which all other horror-thrillers are now measured, both films are remembered for their effectively simple scores and both films were helmed by two of the most celebrated movie directors in history. Yet before the films, there was the original material and I often feel a debt towards a creator if I have especially enjoyed an adaptation. Indeed, if the adaptation has become a deserved phenomenal success, I feel somewhat embarrassed for not even attempting to look at it original medium.


“Psycho” is an unpretentious story and looking at it within the time it is was written one cannot help wondering what would have happened if Hitchcock’s long-time assistant hadn’t picked up on its favourable review. This isn’t to say that story isn’t remarkable, but this is definitely a case of “it’s not what you do, but the way that you do it” rather than an example of ground-breaking genre fiction. Certain social taboos are touched upon, which might have seemed daring in the late 1950s America at the time, but the novel never suffered any of the censorship obstacles the film had to negotiate. It isn’t lurid in its descriptions or gory, which are traits it shares with the film. In fact, it is the banal way that certain horrific concepts are touched upon that might mark its genius. For example, the decapitation of a victim in the shower is delivered as a powerful yet very plain ending note to a chapter. The chapter, in question, would become one of the most iconic scenes in movie history yet it would be executed in a totally different style than what is written in the prose. Both are effective in their own way.


On the subject of banality, Bloch’s characters are not especially colourful yet they are well-developed and the reader feels a certain degree of sympathy for all the main protagonists. We can relate to them. Mary Crane’s actions are out of the ordinary, but this is only because she has lived an otherwise unremarkable life. This is her cry against a predictable and humdrum life. Sam Loomis is no swashbuckling or pearly-white teeth male love interest. He is no rakish or moody Byronic anti-hero either. He is just your average lower-middle class 1950s American male, in debt yet sensible in other ways. Likewise, Lila, Mary’s sister shows plenty of energy and desire to be proactive but nothing seems to suggest she is more than a rightfully concerned sibling. They all seem human enough, each with their own flaws. Their normalcy is a standard device of horror/thriller writers who wish to present the juxtaposition of the story’s sensational hook and core. However, Bloch’s misdirection is a little different in that no one really knows the identity of the murderer, not even the murderer.


Only private detective, Milton Arbogast and Norman’s mother appear to be exceptional people in the main narrative. However, what they make up for in positive and negative attributes they lose in depth. Arbogast is not a deviation from standard modern western world hardboiled private detective. Even his name feels like a cliché, as if he were the lead character in a series of whodunits. This makes him work better as a device more than a character; a device that the reader will feel is comfortable and reliable, after recovering from the drama of the story’s first brutal murder. It doesn’t matter whether or not Arbogast has a backstory or any foibles to the reader. He is there to present the reader with the assumption that he will save the day. In this respect, he is yet another layer of normality we don’t see. Mrs Bates is something altogether different. She is offstage for the majority of the book. Her disembodied voice never far away from the only target of her negative attentions: Norman. She’s a puritanical harridan who bullies her son and we think we have her number.


And what of that son? Perhaps the biggest difference Bloch’s novel offers compared to the legacy it would inspire is the pivotal character of Norman Bates. Introduced at the story’s beginning, which Joseph Stefano wisely changed, Norman Bates is an overweight, balding man with a drink problem. All of these factors were eliminated when Anthony Perkins was cast as the role and his shadow has remained, even with the modern day prequel reboot TV show, “Bates Motel”. What we are presented with is a less sympathetic character, but is nevertheless still a human being who appears to be under the monstrous domination of his mother.

Bloch took his inspiration for “Psycho” from the real crimes of Ed Gein, a hillbilly murderer who would go on to inspire Thomas Harris’s Buffalo Bill serial killer and Tobe Hooper’s b-movie classic, “The Texas Chainsaw Massacre”. However, the Gein case, which occurred only 35 miles from where Bloch lived, is often given too much credence for how much “Psycho” derived from its particulars.


Bloch’s murderer is not a fictionalised Ed Gein. What Bloch was inspired by was the idea that a simple, regular loner, well-known in the local community could have a dark and murderous side hidden from everyone. The same concept could be applied to any number of more prolific killers in crime history before and since the publication of “Psycho”. Gein wasn’t technically a serial killer, depending on whether or not you believe he killed his brother. He was diagnosed to be schizophrenic, which is not the same condition as the novel’s killer. However, with a copy of Marquis De Sade’s work in the possession of the killer and the dynamic of an oppressive mother present, what might seem eerier than the parallels of Gein’s life is the idea that these factors would be present in the discovery of serial killers that struck years after the book’s publication.


“Psycho” is a product of its time. It is one of many mystery novels and horrors that were being churned out in the 1950s. The musty pages of my edition only added to the feel of me stepping back into the time it was created and it is easy to get lost in Bloch’s accessible prose. Don’t expect deeper psychological explanations at the end of the novel or a better understanding of the characters. However, what you can expect is to be taken on the type of ride pulp fiction rarely offers today. The degree of restraint and pacing would have appealed to Hitchcock, and even if you know all the twists it is easy to get lost in them. Unlike, the regular trend of horror fiction the author mainly stays in the here and now. You won’t read passages like “[insert character’s name] was dead the moment he walked through the door”. Despite Hitchcock’s film staying fairly faithful to the text, it is possible to read the original novel without this influence. The characters all serve the same functions and the plot is the same, but there are enough differences that work better in text than they would have done on film.