My Conflict with Conflict 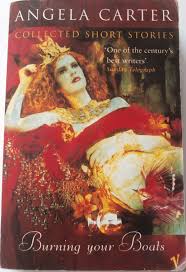 So I saw one of these "Be a better writer..." ads pop up on my newsfeed recently. Maybe I was tired and my mental defences were low, but I read the first paragraph. The key thing, this short story expert was telling me, was that a story HAD to have conflict. It's just a journal entry if it doesn't have conflict, it says in absolute tones. You cannot have a good story without conflict. Your protagonist has to face an opponent, be it another person, nature, god or circumstances... Sounds great. I love a good dust up. I love stories about overcoming adversity. I love them in the traditional and the unusual sense. Some of my favourite writers are masters of devising and setting up conflict... Then there is Angela Carter...

You see, last February I went on a week's holiday. Totally out of character for me, but I did it. I also decided that I needed a break from reading a) research non-fiction books and b) pulp fiction and comics. I needed some real literature to get my teeth back into. I justified it as a way to improve my English. Even if I was working on a non-fiction behemoth, it wouldn't be any good if it wasn't written in an entertaining style. I am confident about the content, but I want to be more than just the reporter or relayer of informaiton. I want people to enjoy reading the book as a separate experience from being interested in the material. Weak justification to one side, this was an unmitigated indulgence. I have always had an omnivorous taste in literature. However, good literature requires (and deserves) time and patience. So, I decided to take Angela Carter's complete collection of short stories on holiday with me and make an effort to read it from cover to cover. I started it in Gatwick Airport and finished it on the plane home. Mission accomplished!

I loved it completely. It was a real treasure and a real insight into how a master of the craft can articulate their imagination. The prose showcased a wide range of styles, sometimes sticking rigidly to certain themes and other times sporadically hitting what appeared to be fleeting ideas. She happily told "jourmal entries", but made them into good literature. Conflict, although present in some of the stories, was not a strong feature. She cared little for it as a device and there were plenty of examples from earliest works to her final ones where conflict were absent.

So, is it always necessary? The example I have given is of an individual that has unanimous acclaim as one of the greatest (if not THE greatest) short story writer of the 20th century. Salman Rushdie, in his introduction, even went as far as to say that short stories were her forte. So, this isn't just a language or artistic freak of nature who could get away with tackling anything within her discipline and be forgiven for defying convention based on aesthetics. She was a master of the craft. Whereas telling someone that conflict is an important device, is it always necessary? Can it get in the way of a good tale?