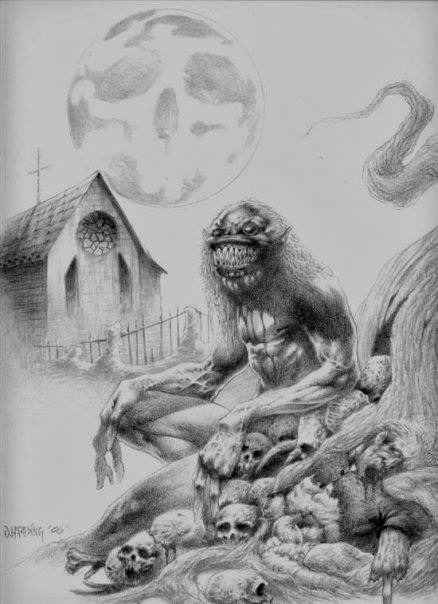 As this is the eve of my favourite festival and in the tradition of "Throwback Thursday" I thought I would re-visit an old nightmare and up-light the stage with the ghoul...

The ghoul ranks amongst the highest of the unreal terrors that haunted my childhood imagination. These grave-raiding spectral monsters seem to be the bestial vestige of the almost neutered vampire figure of today's popular media. However, unlike vampires, werewolves and ghosts, there isn't a linear line to trace its development through fiction. Its iconography has branched off in several different directions and I think we probably could do with a mainstream horror story focusing on a purer form of this monstrosity. The closest I have seen of this happening appears to be in the anime series, "Tokyo Ghoul".

It is common for generations of adults to complain about the violent content of children's fiction, but I pretty much learnt the bulk of my horror education back in the 1980s before I left primary school. In fact, I read about it in primary school! This terrifying poem by Jack Prelutsky was in a book of general children's poetry I bought from our school's Puffin Book Club. The humour is dark and unrelenting. There isn't even a moral core to the story that is often used to offset the grisly content or horrid fates of children in cautionary folk tales. Like the ghoul itself, the poem is relentless in its onward progression through horridness climaxing with a chilling enough thought to give a child nightmares for weeks to come. Is it any wonder that my generation easily lapped up Roald Dahl's contributions to children's fiction.

Like those other grisly man-eating creatures of mythology and folklore, the ogre and the troll, defining a ghoul is quite difficult. Zombies, for example, have been interchangeably described as ghouls due to their human devouring ways and association with graveyards. When George A. Romero reinvented the zombie in "Night of the Living Dead", his monsters were referred to as "ghouls". However, I would like to draw a firm geeky line, for the sake of clarification, between zombie and ghouls. The zombie might be a product of evil or the cause of evil, but he is either the slave of an evil sorcerer, as in Voodoo religion, or a reanimated corpse obeying a basic ravenous instinct. The ghoul is a malicious brand of demon that has its roots in Arabic folklore and is probably more comparable to the aforementioned European ogres.

I cannot remember the first time I encountered ghouls in stories. The same primary school also had a fully illustrated book of mythological creatures and the Arabic ghoul was mentioned. They dwell in uninhabited places, particularly burial grounds and are sometimes described as shape-shifters. Arabic ghouls most famously take on the form of the hunter and scavenger, the hyena. As a point of interesting coincidence, F.W. Murnau depicts his perhaps ghoulish-looking Count Orlock taking on the form of a spotted hyena as opposed to the wolf guise that Dracula acquires in the film's source material. It was that very same species of hyena that took a chunk out of my adolescent hand, so one might say that ghouls really did their marks on my childhood!

In his article for "Cultural Analysis", entitled "The Mythical Ghoul of Arabic Culture", Ahmed Al-Rawi traces the possible origins of the ghoul to pre-Islamic Arabs and their travels :

"In ancient Mesopotamia, there was a monster called 'Gallu' that could be regarded as one of the origins of the Arabic ghoul. Gallu was an Akkadian demon of the underworld 'responsible for the abduction of the vegetation-god Damuzi (Tammuz) to the realm of death' (Lindemans). Since Akkad and Sumer were very close to the Arabian deserts, Arab Bedouins in contact with Mesopotamian cultures could have borrowed the belief in the ghoul from the Akkadians."

These pre-Islamic ghouls were often described as female monsters who often preyed on travellers of the desert, as mischief makers and as deceitful abductors of children. Humans have a strong and inherent sense of protectiveness when it comes to children, and it would appear that our fear of a force harming them is partly manifested in the ghoul. Jack Prelutsky's modern poem appears to be reflecting a very ancient trait of this monster. Several anecdotes have survived where some Muslim scholars have argued that the Prophet Muhammad confirmed the existence of ghouls and they have remained apart of a lot of Islam culture. Ahmed Al-Rawi says:

"...according to the Prophet Muhammed, ghouls are the demons or enchantresses of genies that hurt human beings by eating or spoiling their food or by frightening travelers when they are in the wilderness. In order to avoid their harm, one can recite a verse from the Holy Quran or call for prayer since they hate any reference to God."

The oldest existing text featuring ghouls is "One Thousand and One Nights" and they are present in Islam. In  "The Story of Prince Sayf Al-Muluk and the Princess Badi'a Al-Jamal" from "One Thousand and One Nights", a group of men are led into a cave by a deceptive ghoul, which they blind with a red hot rod.  A man then strikes the creature across its waist, but it does not immediately kill the ghoul. The monster asks that it be struck again as an act of mercy, but the swordsman is immediately warned that a second strike will re-energize the creature. Apparently the idea that a ghoul must be slain by a single stroke, usually by a sword, has persisted through a lot of Arabic stories. Reciting the verses from The Holy Qua'ran, as advised by the Prophet Muhammad, and supplicating oneself to God are also methods used to drive away ghouls. "The History of Gherib and His Brother Agib" has Gherib being abducted by a ghoul, which he overcame and killed after praying to God. It also depicts the story of a prince who is able to enslave a family of hungry ghouls and convert them to Islam. It is interesting to note the humanoid qualities of the ghoul. How could this tribe of devils be converted to Islam if they weren't human in some way? Like the European ogre, it is often referred to as a cannibal, which would not be accurate if it was completely considered to be a different species. Al-Rawi mentions "a story cited by al-Aşbahânī and narrated by Zaid Bin A'slam" that features a female ghoul that is caught eating the liver of ill-fated traveller.

When the ghoul made its way into European folklore is unclear. However, it is perhaps telling that Willaim Beckford's Faustian Orientalist Gothic novel, "Vathek" was inspired by "One Thousand and One Nights" and describes a ghoul. Hans Christian Anderson's story of the "Wild Swans" is the story of a princess who has to gather stinging nettles from a graveyard at night and then weave shirts for her bewitched brothers. During a time when she was gathering the nettles Anderson describes the following scene:

"Then she saw on one of the broad tombstones a group of ghouls. These hideous creatures took off their rags, as if they intended to bathe, and then clawing open the fresh graves with their long, skinny fingers, pulled out the dead bodies and ate the flesh! Eliza had to pass close by them, and they fixed their wicked glances upon her, but she prayed silently, gathered the burning nettles, and carried them home with her to the castle."

Ghouls cropped up in the works of various European and American Gothic writers, eventually making their way into films in one way or another. The 1933 adaptation of Frank King's novel, "The Ghoul" is more of an example of how loosely the term can be applied to non-supernatural humans. The unconnected 1975 film of the same name brings matters back to its oriental link, but retains the human idea. It features a man who after being converted to an evil Indian cult goes mad preys on human beings, slaughtering them and eating their flesh.

My first real introduction to ghouls came via the half-comic anthology horror, "The Monster Club". The final tale is the film's greatest piece. Looking back the false teeth exhibited by the ghouls in the story's final scene are probably a bit too comical, but the story is a truly menacing one. The ghouls occupy a hidden and mysterious village that a movie director stumbles upon when he is on a location hunt. The creeping fear of being besieged by the inhabitants of the story and their back-story regarding the raiding of graves are quite horrific. In an interesting twist on ancient ghouls, there is a single good ghoul in the form of a young girl. In many ways, the story is a pure version of the Arabic legend and stands out from the rest of the film's campy elements.

Ghouls in human form live on in the form of grave-robbers and cannibals. Their crimes reinforce the horrors of mythology and tear apart our comfortable acceptance of every day life. From the crimes of Burke and Hare, who pretended they were body-snatchers but really murdered their quarry, to the murderer Ed Gein who dug up corpses for a variety of reasons, the ghoul haunts our history. Prior to them we had the legend of the cannibalistic Bean family, known as the Ghouls of Galloway. Their story was a work of fiction re-told as if it were real and to this day appears in some pulp non-fiction. Their legacy is in every example of a family that converges to kill. The ghoul haunts our view of our fellow humans and remind us that we are not so far away from the savage times that spawned the legend of the ghoul.