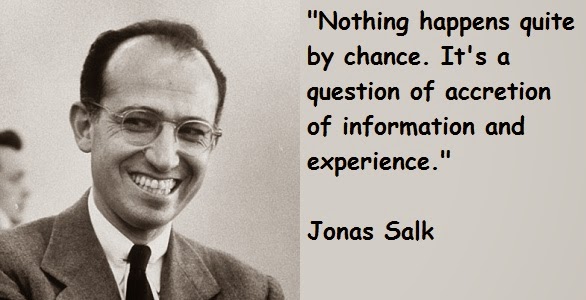 I am going to come straight with you on this one. When it comes to leading lights in vaccinations, most of my historical knowledge ends with perhaps the man we could call the Godfather of Vaccinations, Edward Jenner. Jenner, of course, invented the vaccination for smallpox and started a revolution in medical science. As with an appreciation of the role bacteria play, vaccinating distinguishes itself to the majority of medical treatments in its proactive nature. It puts into the practice the principle that prevention is always better than the cure. By administering a controlled dosage of a disease - in Jenner's case cowpox - an individual's immune system can be activated and thus prevented from contracting a debilitating or potentially fatal disease - in Jenner's case small pox. A continued campaign of vaccinations can completely drive out a disease in a country, as it has done with many deadly diseases we all feared on a relatively short time ago.


Today the world's most powerful search engine, Google, has chosen to honour Jonas Salk with a celebration of his birthday. I for one am grateful for a larger appreciation of this man. It not only serves to get individuals like to me look at more pioneering vaccinationists, but hopefully it will serve to better educate people on the importance of vaccinating. Sadly in this enlightened age we still have to fight a type of ignorance that is comparable to many who were initially sceptical about vaccinations when the concept was new. Conspiracy theorists, the odd fringe scientist, the paranoid, irresponsible politicians and misinformed parents have contributed to slowing down the vaccination process and even reversing it to some degree. I caught measles when I was very young and was lucky to get over it, but I wish my parents' concerns over the period I suffered from the disease could have been allayed by a simple vaccination procedure. 20 years ago vaccination had almost won the battle in the UK in ridding our country of this disease, but there is direct correlation with the rise in anti-vaccinating that has led to deaths from this disease again.
Salk's place in history is a very important one. It is difficult for the current generation of people to appreciate what life was like when polio was a genuine threat in the developed world. I have met people who weren't vaccinated in time and have had to live their lives with the paralysis that polio can bring on. Poliomyelitis was one of the most dreaded diseases to attack infants in the developed world. Although 90% of polio infections cause no symptoms at all, a range of symptoms can be exhibited if the disease enters the bloodstream, particularly if it enters the central nervous system. This can lead to diseases such as spinal polio that can leave a patient with asymmetrical paralysis, usually affecting the legs. Knowledge of how the disease was spread led to better education and schemes to improve sanitation, and there was a determined race to create a polio vaccine. When this was developed in the 1950s by Salk the number of global cases of polio was drastically reduced. His efforts have continued to push for the total eradication of the disease, mainly spearheaded by organizations like Rotary International, the World Health Organization, and UNICEF. However, the disease is still a threat to many children in the world, including new cases occurring in Syria in 2013 and recent outbreaks in Africa and Asia. Another good reason to celebrate the life and efforts of Salk is to draw attention to the fact polio has not been totally eradicated.

I note that amongst the various links that are battling for priority place on Google's search is this interesting post on "The Real Reason Why Salk Refused to Patent the Polio Vaccine". Salk is quite rightfully praised for his immense contribution to world medicine and the subsequent saving of lives of countless numbers of people. He is also further lauded for his refusal to not patent his vaccine, which appears to be one in the eye for "Big Pharma". However, the article brings into question the morality of the vaccinatist's statement, "There is no patent. Can you patent the sun?" The article explains that Salk was not in a position to patent the polio vaccine and therefore his comment did not carry the altruistic connotations that won him the hearts of so many.

In truth, there were many people involved with development of a polio vaccine and it is often the case in such matters that we have a lot of unsung heroes. One of these heroes, Angela Matysiak has argued, was Albert Sabin. She makes this argument in her 2005 dual critique of  Jeffrey Kluger's "Splendid Solution: Jonas Salk and the Conquest of Polio" and David M. Oshinsky's "Polio: An American Story". Both books were launched to correspond with the anniversary of the day that the US Public Health Service licensed Salk's vaccine. Matysiak conceded that Salk's three injections and a booster slowed down instances in middle class Americans. However, she puts it that Sabin's oral cure, licensed in 1962, is really responsible for the cost effective and efficient way that polio was properly brought under control in the US. I have Mr Sabin to thank for the somewhat yucky sugar cube I had to devour as a child.

These are relevant pieces of information and I am keen to keep history accurate. As is the case with just about any important figure in history they are going to lionized or vilified because that is human nature. History has sought to raise Salk's status to that of a hero, which is still a fair comment in spite of these apparent criticisms. His research and development of a polio vaccine deserves recognition. The continued fight against this dreadful disease worldwide, in Salk's name, is a worthy cause. Whether his decision not to patent the vaccine was a further act of extreme altruism or not his decision to make does not diminish the undeniable good he did in developing the vaccine the first place. Likewise, the fact that Sabin's huge contribution does get the recognition it deserves is no slight on Salk's breakthrough in the previous decade. This is a day to highlight the huge debt we and past and future generations owe to medical science, and to celebrate the good that a pioneering individual can make to the rest of the world.