A Day to Remember? 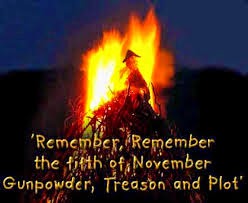 
Okay, it’s not the most original way to start a piece of writing, but I do like its ominous-sounding dramatic emphasis. The day the British changed a part of the Halloween celebration to celebrate the downfall of a Catholic terrorist attack against a Protestant King and his establishment has long since lost most of its significance. The oldest living generations in Britain have lived under the shadow of terrorism for a long time now. Many of us were alive when there was another attempt to blow up the head of our country. More of us were alive when various far larger scale terrorist attacks occurred, which rocked the global community in so many ways as to define post 2001 cultural ideas. This has led us to look at the broader view of terrorism and its many complexities. History also tells us that although the Catholics in question were fanatical, James I and his regime were far from a magnanimous example of religious tolerance.


I like Halloween, but besides entertaining my daughter now with the feeling of an event and the singular memory of visiting my grandparents’ house where they put on big party, I don’t have a lot of fondness for the occasion. It seems lack any sort of salvageable substance as a ritual and there is little in it that is really any different from other occasions. We light bonfires, as we did long before Guy Fawkes and his fellow conspirators were foiled, and we let off the Chinese invention of fireworks. My secondary school was Quaker and for the majority of my time there, our headmaster was Jewish, which pretty much ended any question of burning a “Guy” effigy. My school did consent to have a bonfire party, but I only ever attended one. Having said all that, I am an unashamed history geek and therefore would be wary about forgetting this particular date.

The events leading up to the “Gunpowder Plot” had been around for centuries and would persist for centuries to come. Our most modern example can be found in Northern Ireland where Catholic and Protestant Christian divisions run deep. The whole issue has often been a complex one. For example, Henry VIII may have initiated the creation of the Church of England and split his rule from Rome, but he remained a Catholic throughout his life. His daughter, “Bloody” Mary, earned herself a legendary reputation for oppressing Protestants. She was a far better ruler than she was given credit for, but that is another matter altogether. Her succeeding sister, Elizabeth, showed more tolerance to both sides, but certainly had to deal with her fair share of rebellions. She signed the death warrant of her cousin, Mary Queen of Scots, after imprisoning her for 11 years, for her supposed role in mounting a Catholic/French conspiracy. Mary was probably little more than a figure head for this campaign and she had spent the majority of her time in Britain being used as a pawn for the ambitions of men. 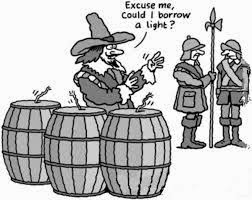 The double twist in the tale came in the form of James Stewart who became James VI Scotland and James I of England, uniting two neighbouring countries that had fought many a bitter war. The first twist went to Elizabeth, as the “Virgin” queen had produced no heirs and was succeeded by the son of the woman she had had executed. The second twist was for those who had seen Mary Stewart as the saviour of the Catholic faith. James I was a devout Protestant in the mould that would be upheld by the Puritans of the future.


Looking at James I, the target of Guy Fawkes and his fellow conspirators, we see an educated man who was both opportunistic and very religious. As it was his men who discovered the plot, he was not only able to preserve his own life but was also in a position to take advantage of the collective gratitude of his peers and lever his own political agenda. James often entered into conflict with Parliament and this event, which became the cause of national celebration, gave him a huge popular advantage. The extent of his own brand of religious zealotry and education can be seen in the literature he had published during his reign. His book, “Daemonologie” would help form the academic backbone of witch-hunt and demonology. The witch finders that would initiate the persecution, torture and execution of innocent people over that particular century, including those carried out by the infamous Witch Finder General Matthew Hopkins during the English Civil War years and those carried out under the Calvinist Puritanism in America, are all part of James I’s legacy. Obviously James was also responsible for putting in writing his own views on how a monarch should rule and he authorized the world’s most influential English translation of the Holy Bible. 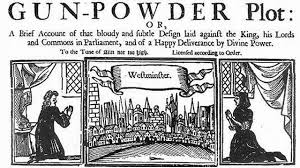 Looking at the actual Gunpowder Plot we can see a good historical example of how a genuine political conspiracy works and the reason why they are often foiled. That, on its own, is a good enough reason to remember and study this episode from history. Humans repeat patterns and history, with good rational insight, allows us to see how we operate. Even with a relatively small group of people, the Gunpowder Plot failed because at least one of the conspirators spoke outside of the group. A conspiracy is as strong as its weakest member. Secrets that affect large numbers of people do not remain secrets for long. The Gunpowder Plot was meticulously planned and driven by intelligent and capable men of passion. However, life rarely runs completely in such an orderly fashion. This is something that your average conspiracy theorist has trouble understanding.