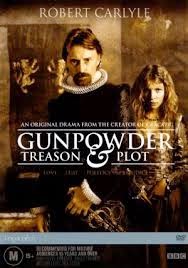 The 2000s saw the rise of quality of TV drama. Looking back to the previous decade it was inevitable that this was going to happen and I aim to discuss the matter in an essay on subject. However, for the purposes of this review we find “Gunpowder, Treason and Plot” riding on the wave of historical dramas with rising budgets. The US were already investing in collaborative efforts in Europe that would see series like “Rome” break new ground in terms of mainstream adult-orientated historical drama.

“Gunpowder, Treason and Plot” was a two-part TV production made for the BBC by a key Scottish crew, including Gillies MacKinnon as director. It exhibited a lot of what was to come, but still retained certain elements from the previous era. Jimmy McGovern, creator the critically acclaimed crime series, “Cracker”, wrote the screenplay. For the most part, he does a decent job framing a complex story and takes some original angles with historical characters. He also clearly had his eye on the changing face of historical dramas for an adult audience. The violence and sex scenes, although not gratuitous, ensured a wider audience. Whilst the story featured complex characters played by the principal cast. We are not relegated to a limited number of unconvincing studio sets either. Instead the entire production was shot in Romania and it convincingly recreates Scotland and England. The audience gets a real feel of scope that many previous history-based BBC productions were missing. A peculiar quirk that seems to have bene left over from the past is the peculiar decision to break the fourth wall a couple of times in the second episode. This is done to reveal the
motivations of zealots on either side of the Catholic and Protestant battle. It feels like an educational device and feels out of place in a melodrama, which takes large liberties with the past. Such concepts, unless they are justifiable soliloquys, really should have been relegated to the realm of documentary drama. Otherwise they just serve to remind us of the stagey-feel of the old BBC dramas.
The two-part mini-series takes the rather peculiar step of setting the two episodes widely apart time-wise. The first episode centres on the reign of Mary, Queen of Scots played by French actress, Clémence Poésy, who affects a bizarre and rather irritating accent throughout. It’s unfortunate, as besides this point she is very convincing in portraying her character. I appreciate the justification for her casting might be down to the time Mary spent in France and a lot of the story revolves on her winning acceptance from her Scottish subjects having just come back from France to take her throne. However, tell me if you don’t wince every time she says the words “my child”. She says it quite a lot too. 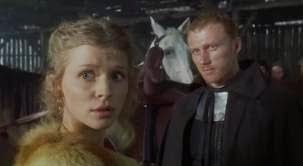 The events of the first episode revolve around the machinations of Mary’s scheming brother and her unhappy relationship with her second husband, Henry Stuart, played by Paul Nicholls, and her love affair with the Earl of Bothwell, played by the up-and-coming Scottish actor, Kevin McKidd. McKidd, who would take the lead in the lavish “Rome” the following year, plays Bothwell as a rough-edged yet courageous Byronic hero who is devoted to Mary. The scheming around Mary and her portrayal as a far stronger personality than she is often depicted makes for a rip-roaring yarn in the modern form and I applaud McGovern’s decision not to go over the predictable story of events that result in her execution, but this viewer was a bit confused with how tenuous this all links in with series title. Robert Carlyle’s portrayal of James I in the second episode somewhat resembles a Shakespearean Richard III. He is depicted as a limping and misshapen villain. A key difference between the two characters being that this production has James as a man susceptible to influence by his wife, played by Sira Stampe, and Robert Cecil, played by Tim McInnerny. Remembered fondly as Lord Percy and Captain Darling from the “Blackadder” series, I have a lot of time for McInnerny’s work. Here he gets to play the Machiavellian villain, moving James to persecute the Catholics. 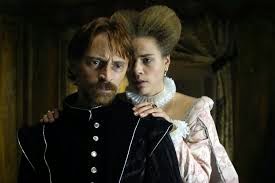 Nevertheless, having James’s evil directed by others is a peculiar decision given that there is not a lot of historical evidence to show that James was anything but his own man. Carlyle plays his role with a combination of spite, coldness and greed. Keeping a modern day audience interested and somewhat titillated, his then taboo homosexuality is shown. However, there is none of his other passions, including his strong scholarly persuasions and obsessions with witch-hunting, on display. Carlyle portrayal keeps the opportunism, but neglects any of his intellectual side. 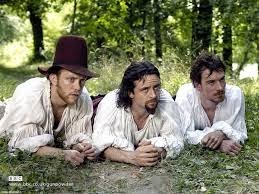 Both episodes share similar themes regarding power and there is a clear intended juxtaposition between Mary’s reign in Scotland and James’s reign in England, which is probably part of the reason why there was such a time-gap between their respective episodes. We see the roles not only of the monarchs, but those around them. Both Mary and James are manipulated by their advisors, and their personalities determine their individual outcomes. This makes for an interesting idea and the programme would probably have been better marketed on this concept than a story based around the Gunpowder Plot. Nevertheless, I feel the two solid if slightly uneven episodes makes for a more substantial historical melodrama than the strung out and protracted “Great Fire” series that was released in 2014.
Don't forget to check out Jamie Clubb's main blog www.jamieclubb.blogspot.com
Posted by Philip Astley at 13:22