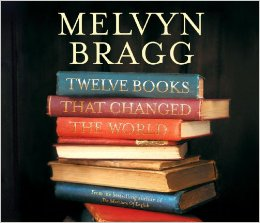 Melvyn Bragg has earned himself the rare distinction of being a true celebrity academic in modern times. His achievements are vast and impressive. His career got off the ground as a successful novelist in the 1960s and he has gone onto win several critical awards up until the late 1990s. I grew up seeing him as the presenter with the peculiar nasally voice, regularly lampooned by the satirical puppet show Spitting Image, who hosted The South Bank Show. Bragg had a reputation for arts and culture, but I later discovered he was a huge driving force behind science in the Radio 4 programme, In Our Time, which he took over hosting and currently still presents. The show presents itself as a history programme with Bragg hosting or, to be more accurate, chairing a panel of university lecturers on a particular event or person from history. However, in line with Eleanor Roosevelt’s regular quote regarding small minds discussing people and medium minds discussing events, the listener quickly discovers the strength in the show is its exploration of ideas. Bragg does well to keep the discussing going along certain channels and even testing certain arguments with the impartial view his role demands. Such a role reveals a broad yet in depth understanding of a vast array of subjects that straddle the worlds of imagination and fact-finding. As a fellow writer that does not like to be confined to a narrow path, I find it is truly inspiring to see now that his published work includes a wide range of subjects in both fiction and non-fiction. Therefore, I shouldn’t have really been surprised to see the hugely disparate selection of books he chose for 12 Books That Changed the World.


In order of contents the has individual chapters on Principia Mathematica, Married Love, Magna Carta, The Rule Book of Association Football, On the Origin of the Species, On the Abolition of the Slave Trade, A Vindication of the Rights of Woman, Experimental Researches in Electricity, Patent Specification for Arkwright’s Spinning Machine, The King James Bible, An Inquiry into the Nature and Causes of the Wealth of Nations and William Shakespeare’s First Folio. Each work is given a description of its history, development and its impact on the world.


The first thing most literary fans will notice is the fact that Shakespeare’s entry is the only fictional tome on the list. Those who are aware of all the choices listed will note that several stretch the definition of what actually constitutes a book. On the Abolition of the Slave Trade is really just a speech, Magna Carta is a type of contract and Patent Specifications for Arkwright’s Spinning Machine is a type of legal legislation. Furthermore, all the chosen works are English in origin. I guess calling his book 12 English Works of Literature That Changed the World doesn’t have the same ring. After all, despite a lot of the dry material covered and Bragg’s refusal to patronize his reader, this is clearly a work aimed at a lay audience.


The book, as a whole, makes for an interesting read. This is, in part, due to Bragg’s sometimes eccentric justification for his selection. For example, I am still not convinced by the inclusion of The Rule Book of Association Football other than for the sake of variety, but I still found it to be one of the most interesting chapters despite not being a football fan. This might be down to Bragg’s own considerable literary ability and knowledge of history. We are therefore not left with a list of works that are the best representations of English language in written form, but sometimes important events in history that happened to be recorded in words. This is certainly the case with Patent Specification for Arkwright’s Spinning Machine, Magna Carta and An Inquiry into the Nature and Causes of the Wealth of Nations. However, when we come to Mary Wollstonecraft’s A Vindication of the Rights of Woman, the King James Bible and the only fictional work – the book Bragg argues is the most influential on his list – Shakespeare’s First Folio we have clear examples of the impact of language.
Certainly the content of Wollstonecraft’s work is significant and has immense philosophical influence. However, her rhetorical style was not an insignificant part of its appeal. The King James Bible, as Bragg points out was not the first example of biblical text written in English. The changes made in the text from the previous bibles have helped significantly change the way a lot of scripture is quoted. It could also be debated that these changes have helped shape all interpretations since the bible’s publication. And yet this is a translation and not really an example of original English literature. Finally, Shakespeare’s work is all about the language. Many modern day students will read the Old English Beowulf and the Middle English of Chaucer without fearing to lose the original works’ significance. However, Shakespeare must be understood in its original language. Bragg putts it that before Shakespeare’s material started gaining fame the English language was poor compared with many of its European neighbours. The Bard’s phrases, metaphors and vocabulary raised the status of his native tongue, and established his own reputation as history’s greatest writer. I find it hard to disagree with Bragg’s inclusion and argument here, but it seems a little at odds with the rest of the list.


So, there is a little bit of confusion and contradiction in the list of texts here. The criterion is not really very clear or, at least, when Bragg states it he really doesn’t keep to it. This doesn’t stop it from being a very good read. I would definitely recommend it to anyone who would like to indulge in a broad interest of historical subjects from the 1600s to the 1800s. The author’s style is as entertaining as the programmes he has co-created and the information contained in each chapter provides some very interesting insights into history.