Joan of Arc for young adults

Icons are not as easy to fathom as we might like. Too many of them have become enshrined in a country's sense of identity and then crossed over as s pure symbol for a philosophy or political ideal. Finally, they make their way into a universal representation of something that dares defiance. Joan of Arc is a prime example. I struggle to find something that properly grounds the person and separates the myth. The below book wasn't the answer.

I came to this book purely by chance. It wasn’t reviewed or recommended to me. I have a rather omnivorous taste in most things and history is no exception. However, if there is an area that attracts my attention more than most it is the dissection and deconstruction of historical icons. I love myths and legends, and part of the process of appreciating a fictionalized story is distilling the actual facts. It seems like a bizarre motivation and against the normal persuasions of a romanticist, but I have never claimed to be a straightforward personality. When one considers that I have a keen interest in endorsing critical thinking, it all makes a bit more sense. Nevertheless, “Beyond the Myth: The Story of Joan of Arc” has never made any sceptical reading list I have seen. I chose it because I wanted to read a compact and comprehensive description of Joan’s life and the title perked the interests I have already mentioned.


Polly Schoyer Brook’s book delivers pretty much what I wanted. It is told in an exciting style, not that far from an historical novel. It is also easy to read. A little too easy, I thought as I approached the middle of the book. I had neglected to read that the book had been written for a young adult audience. This made a lot more sense. Brook does engage critical thinking and tries to ground a lot of the saintly mythology that has grown up around Joan’s legend since her demise. However, if I was after a thorough and scholarly dissection of Joan’s life then I should have waited for Helen Castor’s book that came out almost a year after I bought “Beyond the Myth”. This is the book that strips back the accepted view and juxtaposes it with the general attitude towards religion interwoven with politics. “Beyond the Myth” is not remiss in providing a contextual view, but the narrative just repeats the well-known story albeit from a rational perspective and does tend to aid the canonization process in most people’s minds.

Helen Castor argues in the epilogue to her book that “in gaining a saint … we have lost a human being”, which I often feel is the problem when we refuse to properly examine our icons. The problem with “Beyond Myth” is that it goes along the familiar path of questioning Joan’s sanity as a reason behind her hearing voices. By contrast, Castor’s book explains how a person claiming they are hearing voices from saints could be a strong political weapon. Brook stands back from to look at the whole picture, but it is still within the confines of an established view. 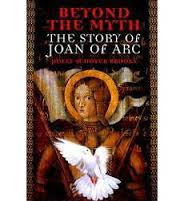 In conclusion, “Beyond Myth” is a well-written book that could serve as text book for GCSE or AS level history students. For those who want a concise review of Joan’s life, told in an entertaining fashion, this is the book for them. It is only 176 pages long and is well illustrated with a mixture of colour and black and white images. These are of buildings, places, paintings, etchings and the like. The book lacks detailed discussion or investigation into the story or any of the characters. However, it is very evenly set out and is an ideal starting point. Brook is has a strong voice for narration and those who are usually put off by dry history should find her to be comfortable change of pace.