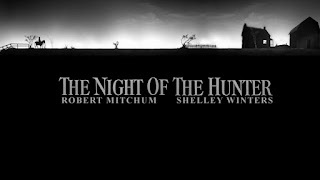 
1930s West Virginia: A bogus preacher, Reverend Harry Powell (Robert Mitchum), who has been secretly murdering wealthy widows, finds himself in a cell with a robber, Ben Harper (Peter Graves), convicted to hang. Harper has confided the location of the money he stole to his son, John (Billy Chapin), but mutters a verse from the Bible in his sleep that gives Powell a clue. Upon his release, Powell tracks down Harper's widow, woos her, marries her and kills her. However, in order to get the secret stash he needs to convince young John and his sister to tell him. The hunt begins...


According to perhaps the most successful horror writer in history, Stephen King, "Night of the Hunter" is one of the greatest examples of classic horror cinema. Over at least a decade I have periodically trudged through the list of horror literature and horror films King provided in his non-fiction book on the horror genre, "Danse Macabre", and in several unusual instances I had to agree with his conclusions. For example, "Whatever Happened to Baby Jane?" is a contentious entry, as many might not agree it is an obvious horror picture. I feel that it has all the hallmarks of American gothic horror. Just because it doesn't conform to the most common ideas of horror doesn't make it not a horror film. However, I have to disagree with his verdict on the original "Night of the Hunter". I have problems defining as a horror film or a standout classic. This is despite it containing elements of the horror genre and also an interesting premise along with a good and edgy performance by Robert Mitchum.
The 1950s were a bad time for horror films on the whole. In fact, when I made my list of the 10 best horror films and decided to restrict myself to one move per decade I had to break my rule. There were simply much better horror films before and after the 1950s to justify even putting in Hammer Horror's excellent productions of "Dracula" and "The Curse of Frankenstein" (although "Dracula" was a very close call). It was a great era for science fiction crossovers and I loved "The Fly", but this just seemed to be just one example of a minor classic film that wasn't as important or good as its re-make (see 1951's "The Thing" for another example). Anyway, most listings of great 1950s horrors don't even consider "Night of the Hunter". So what made King champion its importance so much? And why is it considered such a classic as to be "culturally, historically, or aesthetically significant" by the US Library of Congress? It was a question that haunted me through my first and only viewing of the picture when I finally got around to watching it.


First up, the setting is pretty good. The Deep South of the USA has long since become a popular setting for modern horror movies. I have observed a lot of fear directed to these southern states by the more industrialized and liberal northern states. To many it conjures up prejudiced images of vast empty spaces and backwards people high on intolerance and religiosity. Horror works when it cuts straight into primal fears and brings us close to chaos. The Deep South has been used to do this in numerous "Hill Billy" horrors and supernatural films, but this film fits into neither of these categories. Instead we are given an Elmer Gantry type of avarice motivated killer "preacher" who tracks down true innocence in the form of the two children. The idea is fairly powerful and perhaps the reason why the film's basis, the thriller novel of the same name, won so much critical acclaim. Next the film falls under the direction of the great actor Charles Laughton (his only directorial effort). Laughton apparently drew a lot of his inspiration from the German impressionist movement (think "Nosferatu", "Faust" and "The Cabinet of Dr Caligari"). This pervading silent era eeriness is probably what Stephen King picked up on. It is creepy in parts, particularly in the film's final act, as Robert Mitchum and his elderly antagonist unite in a hymn whilst he stalks her property and she defends it with a shotgun. Finally we have Robert Mitchum's performance - the great actor trumping his other heart-throb contemporaries, with possible exception of Tony's Curtis's portrayal of Albert DeSalvo, by taking on a truly edgy role.He plays an understated menace that would not be rivalled until the days of Pacino and De Niro over a decade later.

So, the ingredients and the respected acclaim are all there. Why do I find myself not agreeing? Quite simply the film doesn't build momentum well. The scenes that should inspire horror are few and far between and don't have enough impact to get the heart racing. Against any of Hitchcock's thrillers of the time, "Night of the Hunter" is no match. Whereas Hitchcock could draw out and distract viewers for incredible lengths of time before bringing in the suspense and shocks, "Night of the Hunter" scores near misses - Mitchum's odd hysterical scream towards the end - and is anticlimactic. The film's epilogue, for example, seems like a protracted moral lesson and only further confirms the relatively uneventful feel of the picture. It's a real shame, as I want to love it, but in the end it just felt like a very good episode of The Waltons after Friedrich Murnau got his hands on it.

It's certainly worth watching for the positive reasons I have outlined and maybe to get something from it that was clearly lost on me. "Night of the Hunter" is a disturbing drama with a standout performance from Robert Mitchum and wonderful neo-expressionist stylization ideas from Charles Laughton. However, a classic horror movie it is not.