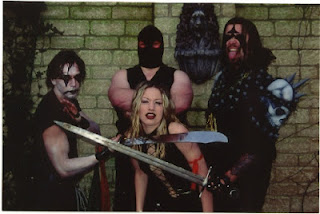 It was October 1998 and I was stood dressed in a pirate costume complete with a polka-dotted handkerchief wrapped around my head and a live macaw on my shoulder. The business of supplying and training animals for the entertainment industry is a rocky ride with varying highs and lows. Some days you can be enjoying the company of the world's most celebrated stars. My father has been personally summoned to Prince Rainier's palace, John Cleese's London apartment and many other places to receive recognition for his work with the most dangerous and beautiful animals on the planet. Other times you are sitting on the set of a basement level budget production with a box full of moths. That night in October, I and two female employees of my parents had been booked to appear at the 21st birthday party of a millionaire's daughter. Under a huge marquee an elaborate pirate party had been put together. The entrance to the event was off the end of a life-size replica ship, overhead there were fire-breathing entertainers on top of a specially constructed bridge and on the ground level paid actors walked amongst guests dressed as pirates and around tables decorated with "treasure chests." We were the parrot handlers, paid to walk around dressed like seafaring scallywags off a Christmas pantomime.

My mind wandered back to another time. Just two weeks ago my creation, "Dead Souls", the world's first Gothic martial arts act, had debuted in front of a shocked professional wrestling audience. Amid an array of lighting effects and pounding music, I, under the guise of the Spirit of Instinct, had done battle with The Gatekeeper in a routine that looked part ritual part fantasy performance with clashing blades, spinning high kicks and tumbling tricks. Nothing like this production had been presented before to a professional wrestling audience and certainly not a British one. It had become the climax of two exciting months of realising old dreams. My emotionally destructive relationship with my longest running girlfriend at the time had also been given its death stroke. I felt free and ready to explode with ideas and enthusiasm. The excitement of producing a show was over, but I, along with the wrestler, Stuart Allen, knew that there was a fantastic world out there to discover.

Then, just when I felt my soul being transported back to the cheering crowds and coloured lights, a voice broke through the haze. "Fetch me another ashtray." One of the many guests at the birthday party had mistaken me for being an elaborately dressed waiter. Keeping what little dignity I felt at the time I politely explained that I wasn't what she thought I was. At that very moment I was aware of a warm sensation creeping down my shoulder. The parrot had shit on me.