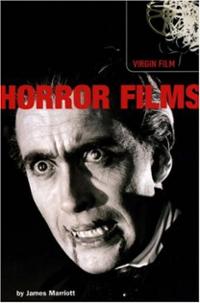 "Horror Films" is an unimaginatively titled, self-styled "step-by-step companion to horror films" produced and commissioned by Virgin Books Ltd's "Virgin Film" subgenre written by James Marriott. Marriot has also written three other Virgin travel books under the pseudonym Patrick Blackden. The book's cover features a full page single black and white still of a fang-baring, blood drooling Christopher Lee in his iconic role of Dracula. Each of the book's 20 chapters focuses on an era defining and highly influential horror film and following a list of full cast and key crew members divides its discussion up under the following titles: