A Review of "Marvellous" 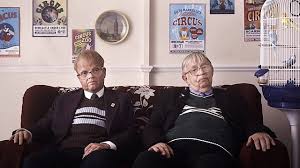 Plot:
“Marvellous” is based on the true story of Neil Baldwin. Baldwin was diagnosed with “learning difficulties” at school, but didn’t allow the label to discourage him from achieving as much in life as his heart desired. We meet Neil working as Nello the clown in the circus. He goes on to get a regular role at Keele University, advising and helping students, and is employed by his beloved football team, Stoke City. Along the way, his mother worries profusely whether he will be able to look after himself after she dies.

Review:
Before I begin, I guess I better put in a mild caveat. A TV film like “Marvellous” is probably not going to get the most unbiased of reviews from me. It focuses on the life of someone who I never met, but nevertheless I know plenty of people who do know him. This includes the great Norman Barrett, a dear friend of my family, who features in a brief cameo at the film’s conclusion and is also mentioned a few times, including his MBE status. These are all anachronistic, but that takes nothing away from the nature of the film. Norman’s budgies are also a plot point. For the most part, the film shows circus in a good light, which is a refreshing change. Only the ringmaster of the first circus is presented as something of a villain. This is becoming a bit of a cliché now along with the assumption that the ringmaster is traditionally the owner of the show. Nevertheless, many of my circus friends and family were smiling when the film won the Best Single Drama category of the 2015 BAFTAs.
Read more »
Posted by Philip Astley at 08:45