A Cut Above Most Multiple Personality Disorder Bios 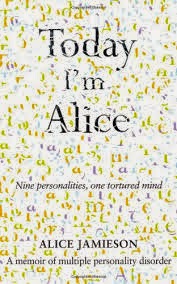 Today I'm Alice is the autobiography of Alice Jamieson, an individual who was eventually diagnosed with DID (Dissociative Identity Disorder) formerly known as MPD (Multiple Personality Disorder). It tells the story of an intelligent young girl who, on the surface, appears to tick all the boxes a modern society dictates for becoming a successful person. She has travelled a lot, working in Israel and contributed to and raised money for worthy charitable causes. On a physical level she is an enthusiastic runner who regularly completes the London Marathon. On an academic level she storms her way through education as a diligently studious and hard-working scholar, lands herself a good job befitting her education and seems well on her way to achieving her PhD. It is at this stage that her whole world comes crashing down and her serious psychological and mental problems come to the surface, resulting in many admittances to her local accident and emergency with serious - sometimes near fatal - self inflicted injuries.