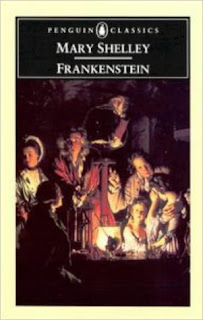 For those who are unaware of one of the most famous stories in Gothic literature, I would like to introduce you to “the story of Frankenstein… I think it will thrill you. It may shock you. It might even horrify you.” You won’t find any of these lines in the original 1818 novel, although the author once famously remarked that she had wanted to write a story that “…would speak to the mysterious fears of our nature, and awaken thrilling horror -- one to make the reader dread to look round, to curdle the blood, and quicken the beatings of the heart”. The image of Whale’s “Frankenstein” is just one example of several horror icons that have become more readily identified with their filmic representation than their source material. Colin Clive’s hysterical portrayal of Frankenstein set the “mad scientist” stereotype, which was far removed from Shelley’s original tragic Faustian version, and Boris Karloff’s simple-minded, grunting, lumbering portrayal of The Monster was even further away from the intelligent, blighted and scorned figure of Milton-esque vengeance in the novel. However, the novel has bitten back over the years since Universal did such a great job of immortalizing its own icons.  The 1980s proved to be something of a watershed in this respect and this is where we find the first publication of Maurice Hindle’s edited text. It is this influential edition of the novel, which has subsequently been reprinted in the same format several times now; I am reviewing rather than the original story.

Stumbling through the Tulips