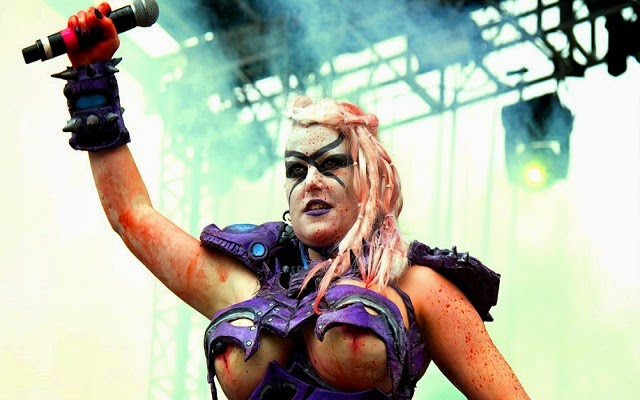 I was delighted to hear that the Thrash Metal band, Gwar, announced Vulvatron (played by Kim Dylla) as their new front-woman. Never a band to take themselves too seriously, Gwar took horror rock theatrics, popularized by the great Alice Cooper, to a new and different mutation. They were ahead of Death Metal, Black Metal and Nu Metal, effectively sending up the genre before it had had a chance to take itself seriously. They were never really a brand of Thrash Metal I especially liked from a musical perspective, but I loved their imaginative live sets and the sheer audacity of their ideas. The 1980s were a time when the mainstream ignored the beautifully ornery reaction to 1970s rock stage shows presented by punk rock, quickly developing into corporate rock and glam metal. Gwar rode these over the top theatrics into a crazy mythology of science fiction, horror and fantasy, attacking media censorship and revelling in the fun. They were never a band's band in the respect that their line-up has been a consistently revolving array of artists, including those who work diligently on the bands costumes, staging and SFX. However, I like the fact that despite delivering interviews in character they refreshingly admit they are playing parts. This makes a change from many rock stars (including some of my favourites) who think they are method actors and get absorbed into their manufactured persona.