“Gums 2” or “Why a Jaws Remake will Probably Suck!”

Following on from my article regarding reboots, my attention was recently drawn to the threat that a remake of “Jaws” was in the works. Forgive me for being out of the loop on this one, as it’s been in the public forum since at least April this year. Even more horrifying than this prospect is the fact that it appears to be more than a slight ripple in the rumour tank. The auteur director of the original classic, Steven Spielberg, officially announced this proposal to the executives at Universal.  According to INSC Magazine, Spielberg has been “vehemently” campaigning for super-geek Kevin Smith to direct the picture due to Smith’s clear love of the original. This all seems like more of the cynical geek-chum we have come to expect from remade/rebooted/readapted blockbusters I mentioned in my article about reboots.

When asked about making a sequel to his original film, Spielberg said that "making a sequel to anything is just a cheap carny trick". However, he did consider taking on “Jaw 2”. This was before he would direct sequels to “Raiders of the Lost Ark”, “Jurassic Park” and would even make an original sequel to J.M. Barrie’s “Peter Pan” in the form of “Hook”. Now, Spielberg believes the time is right to remake “Jaws” taking advantage of the CGI effects available to us. The director was known for his frustrations with the temperamental mechanical sharks used in the original, which were all called “Bruce”. The same INSC Magazine also mentions Spielberg’s interest in such ideas as having an internal monologue for the shark being provided by Ben Affleck, showing that the fish had larger motivations than pure instinct. It gets worse!

Here are few reasons why a “Jaws” remake, going on the wealth of evidence provided by the film’s legacy might be beyond redemption. 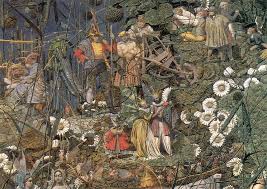 I read the below article, "Our Woody Allen Problem" a few days ago in "Psychology Today". It is interesting that others have pondered the cognitive dissonance we seem to face when we don't agree with the morality of the artist, but we are a fan of their work. I think a huge amount of latitude needs to be applied. If I was to go through all the films, novels, plays, songs, installations, sculptures, paintings, poems etc. etc. and make an assessment of the key artists involved against my own morals, ethics or even personal philosophy, there would be no one left.

This has been a problem for me since childhood. Growing up in a culture that it has often been fashionable to persecute, traditional circus, it became all-too-common to discover that some icon or other opposed what my family did for a living. Not only did I have to make a decision to either separate the individual from what they produced, but I was often at war with my tastes when a certain prejudicial or gross insult to my people suddenly appeared in a favourite programme, book or other work.
Looking at the example presented in the Woody Allen  article - and I appreciate this isn't the entire thrust of the psychological argument -  the problem here is that the morality of the artist's life casts a troublesome shadow over the themes of his work. Indeed, this was the same issue I encountered when a gross distortion was made about my people. It ended up leading me to question the validity of a certain individual's work. Even in the realm of fantasy and fiction were they a farce?
Read more »
Posted by Philip Astley at 07:52